Day one at Left Coast Crime

After a nine hour flight from Ottawa to San Francisco, we took the three hour shuttle to Monterey. Coincidently, Mary Jane Maffini and Linda Wiken were on the same flight and shuttle, so along with my travelling friends Janet Bowick and Glenda Stewart, we made up a little posse trooping through airports. 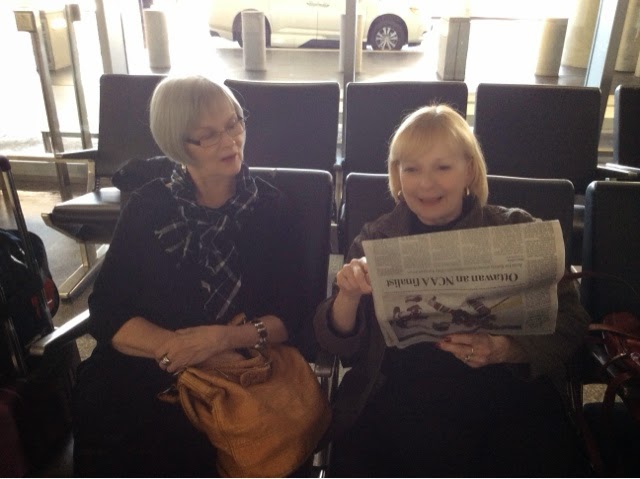 Linda Wiken and Mary Jane Maffini reading the Homan family curling story in the San Fransisco Airport as we await the shuttle.
The sight of green grass and the warm afternoon temps (75 degrees F) lifted everyone's spirits. Man, we have endured a long cold winter in Ottawa, but reprieve for a few days at least.
The Portola Hotel and Spa is a low sprawling complex and very comfortable. Jan and I are sharing a room and we were thrilled to open the wall to ceiling windows to let the cool air blow into the room all night. I awoke to the sound of gulls since the ocean is just a few blocks away.
Last night, at what would have been ten o'clock our time, but is seven California time, the five weary travellers gathered for a lovely meal in Jack's, the hotel's fine dining restaurant. I had the sole and it was really tasty - went well with the two glasses of Merlot - and then I slept like a baby. Ted swears by a few glasses of something the first night away to help one sleep. It worked so well last night that I'm going to have to repeat the process tonight. 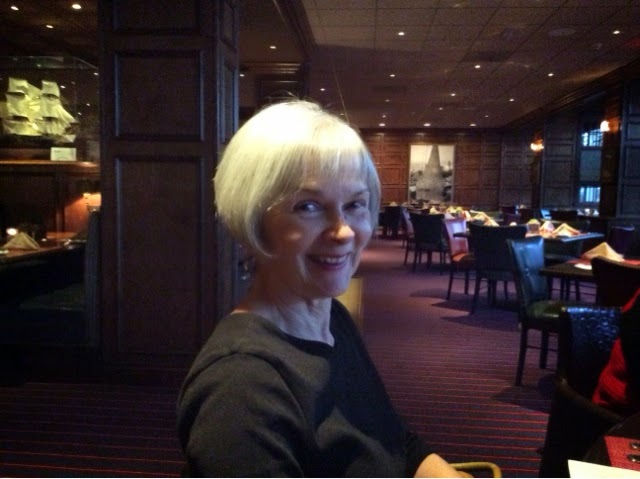 Linda Wiken in Jack's.
So, here I sit with my Starbucks coffee catching up on the news of the day. I met Ann Cleeves in the lobby - just in from England with her husband Tim. We're on a panel together tomorrow! Jan and I are heading to Fisherman's Wharf for breakfast - it is a short walk from the hotel - and then on the bus for the Grand Sur tour this afternoon.
The fun is just beginning . . .
Posted by 7 Criminal Minds at Wednesday, March 19, 2014