Holidays on the Horizon 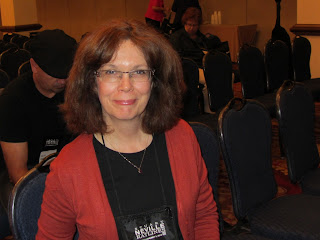 I've been reliving Bouchercon in Cleveland because I was asked to submit an article about it for the next Capital Crime Writers newsletter. In some ways, it seems like such a long time ago, but was just last month! I'm also organizing the Crime Writers' Christmas dinner in a few weeks' time at a local restaurant. I'm so looking forward to hearing our special guest speaker TIm Wynne-Jones, who just received the Order of Canada - he is also a two-time Governor General award-winning author and a heck of a good writer, not to mention great guy.

So lots of little tasks to keep me busy. I lost the access info to my website and have to sift through the stack of paper on my desk to find the printout - I know it's here somewhere. I also volunteered to write another article about our last Crime Writers' meeting for the newsletter and need to get on that.

What else? Christmas cards to write, gifts to buy and calendar filling up with events . . . it's getting tough to fit in writing time on my manuscript. I've got the next few scenes plotted out and am eager to get writing them. Once I get my errands done today, I'll be at the keyboard and have all day tomorrow. It's a balancing act. Real life vs. fantasy time.

Friends who follow the blog have asked if Ted got the outdoor Christmas lights up yet. The answer is not yet. Perhaps, we should run a pool. Ted used to go shopping for my gift on Christmas Eve, but he's now backed that up a few days. I never really minded though as he'd traditionally find his way to a jewellry store. I'm a sucker for anything that glitters. I think there's a magpie somewhere in my lineage.

If you have fifteen minutes, the video of opening and closing remarks and my reading from Chapter One of Second Chances is up on Youtube.  A bit of fun.

Just seeing some snowflakes swirling outside my office window. It's time to get dressed and head to the shops. I avoided them yesterday, Black Friday - not too sure why we want to emulate the greed and frenzy in the American stores that we've been seeing on the news, but I understand the need to spend our money in Canada. Still, I'd rather chew off an arm than get into a pulling match over a purse or other bit of merchandise. It kind of kills the whole idea behind Christmas. I wonder if others see the irony.
Posted by 7 Criminal Minds at Saturday, November 24, 2012 No comments: 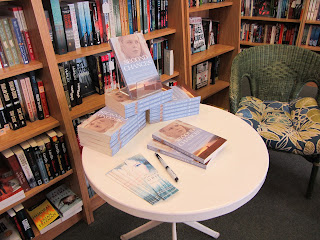 This was the cozy set-up for my signing at Books on Beechwood last Saturday afternoon. I sold a decent amount of books, met some new readers and browsed through the mystery book selection. Books on Beechwood is hosting a mystery evening on December 13th and I'll be there alongside Mary Jane Maffini, Barbara Fradkin, C.B. Forrest, Robin Harlick and Linda Wiken. It's your last chance before Christmas to come out and meet the gang and get some Christmas shopping done at the same time. Sadly, Books on Beechwood is closing at the end of January - we're really going to miss Jean and her crew. They've been supportive of us as local authors and often sell books at our launches.

My launch video by Patrick Walton is now on Youtube.  You can access it here hopefully and if not, just copy this link into Youtube:  https://www.youtube.com/watch?v=NX9vOdtpf1U. Kind of a funky little piece. Patrick also recorded remarks by Counsellor Katherine Hobbs and MPP Yasir Naqvi and my brief reading from Second Chances and will be posting that on Youtube as well this week. The videos may never go viral since I'm not singing Justin Bieber songs in my nightgown alone in my bedroom with an adorable puppy, but fun memories nonetheless.

I've played hooky from writing this week. I'm on an assignment at work for five weeks and busy learning the ropes so a bit tired when I come home. I also curled Monday and Tuesday evenings and then went to Capital Crime Writers on Wednesday evening. We had a fascinating speaker, retired Staff Sergeant Syd Gravel, who spoke about the post traumatic stress he suffered after shooting and killing a robbery suspect in 1987. He held us spellbound as he walked us through that evening step by step and the event that changed him forever. I gained insight into the trauma from which police officers are not immune whether they shoot someone or are shot themselves in the line of duty. Seargent Gravel's moving presentation will stay with me and will certainly inform my writing (which I will be getting back to today) (I promise).

Did I mention that I am also on the Program Committee for Capital Crime Writers? You might wonder where I'm finding the time. I'm beginning to wonder myself. In any event, I'm organizing the annual Christmas dinner next month and have lined up two-time Governor General award-winning author Tim Wynne-Jones as our guest speaker. I'm most excited to hear Tim talk about his writing and he will also be reading from his work.

So, a bit of writing this morning before I head off to do some Christmas shopping along Wellington Street. Then home to watch some curling on tv (while I write) (I promise). My daughter Lisa is curling with Rachel Homan and they have qualified for the quarter-finals in a grand slam event in Brantford. Some of the games are being televised - Homan plays tonight at 8:30 and while they likely won't be the feature game since the men and women are also playing at the same time, there are updates and key shots shown from all the sheets. Go team!

And now, for a little de-stresser as we all get our day underway, with a photo of our first fire in the grate last weekend - picture the room in darkness, you with a glass of wine, good music on the turn table and nothing that can't wait for the next hour  or two . . . 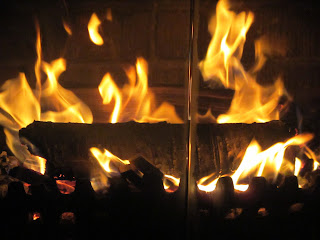 Posted by 7 Criminal Minds at Saturday, November 17, 2012 No comments: 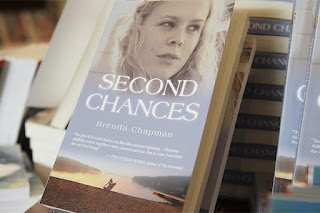 It's been a cold, crisp November - gray skies and shivery mornings at the busstop at seven a.m., heading off to work. I even found myself in some stores Christmas shopping - not that I bought anything - but, I almost did. The annual panic should be over taking me soon. I'll begin hounding Ted to put up outdoor lights and we'll carry on that discussion until Christmas Eve or so when he figures it's time.

I wrote a lot this week on my new manuscript for Dundurn as well as jotted down plot points for the second in the Anna Sweet series for Grassroots Press. While it's tempting to start writing the second Anna Sweet, I'm going to wait until I have a solid draft of the Dundurn book completed. With everything else on my plate, working on two manuscripts will just get confusing - and life is confusing enough as is.

I often plot in my head on my way home from work on the bus and many times, I lose track of where I am. Some day, I'm going to overshoot my stop and I'll have to back track. Maybe it's time to invest in a GPS or one of those tracking devices like they use in spy movies. Ted could monitor me from home and pick me up, if necessary. (Speaking of which, I hear the new Bond movie is excellent - looking forward to seeing it.) (I wouldn't be adverse to Daniel Craig tailing me too.)

Patrick Walton attended the launch of Second Chances in September and has just completed a two-minute video, which he's loading onto Youtube and will be available later today. I'll post the link on my Facebook site and this blog next week. He also recorded remarks from Ottawa City Councillor Katherine Hobbs and MPP Yasir Naqvi and my reading of the first chapter and this longer footage will also be posted. You can watch with a glass of wine and some cheese and crackers and you'll feel just like you're at the launch from the comfort of your computer screen.

Today, I will be at Books on Beechwood from one to three, signing copies of Second Chances. If you're in the neighbourhood, drop in and say hello. You could even get some Christmas shopping done and nip that annual panic in the bud.

Posted by 7 Criminal Minds at Saturday, November 10, 2012 No comments: 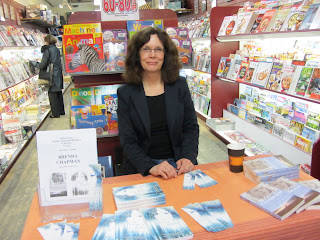 If you live in Ottawa, you have to stop in at Brittons in the Glebe at Bank and Fifth. Not only will you get to meet Ted the owner, but you'll have a chance to chat with Linda Wiken, former owner of Prime Crime bookstore, and now, manager of a mystery book section in Brittons. She's there on Saturdays , amongst other days, and  if you time it right, you can meet a local crime author most Saturday afternoons. Linda also has a Berkley cosy series on the go under the pseudonym Erika Chase - I've read her first A Killer Read and am looking forward to the second in the series due out soon. 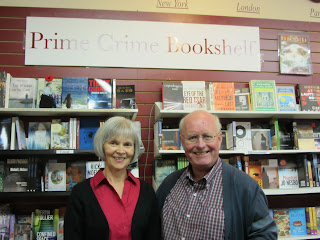 LindaWiken  with Brittons owner Ted
I spent a few hours in this great shop last Saturday and met people from the neighbourhood and a few friends who dropped by, including my travel mate Mary Jane Maffini, another fine cosy mystery writer whose trademark is a killer sense of humour. Even her two dachshunds came to look over the book selection, dressed in their Hallowe'en costumes. They kept barking, "Trick or dog treat". 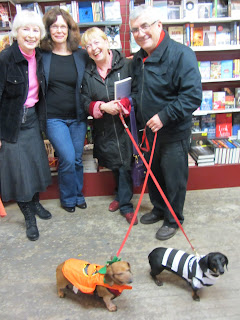 Life has been much too busy lately with not much chance of slowing down in the foreseeable future. I snatch hours of writing between work, curling, social events and sleep. Today is one of those rare gems when I have a whole day to write . . . well, with time outs for grocery-shopping, laundry etc. etc.
And a few events on the horizon:  Next Saturday, November 10, I'll be at another great bookshop, Books on Beechwood from one to three, signing copies of Second Chances. Come by and chat if you get the chance.
Books on Beechwood is also hosting a mystery-author evening before Christmas and I'll post more about that next week. I'll be part of a Granite Curling Club fund raiser on January 16 (yes, that's in 2013) alongside Mary Jane Maffini, C.B. Forrest and moderator, City Counsellor Katherine Hobbs. (How fun will that be?!) I also heard from the Ottawa Public Library that I'll be teaching a short story workshop to kids as part of the Awesome Authors contest in early January. So happy times ahead.
Some lovely reviews showing up on Amazon and other book sites for Second Chances. The feedback I've been getting from adult readers is that the book really does take them back to 1971 - odd to see it listed in the history section by some of the booksellers! Thank you so much to everyone who takes the time to let others know about my books. You keep me motivated and busy at my keyboard working on that next manuscript.
﻿
Posted by 7 Criminal Minds at Saturday, November 03, 2012 No comments: