Well, it's been an exciting week in Kingston, watching the Scotties playdowns. Our Rachel Homan rink finished the round robin in second place with a record of ten wins and one loss. They will play in the one-two game against Jennifer Jones, Team Manitoba, who finished the round robin undefeated. It promises to be a nail-biter. The third and fourth place teams, B.C. and Team Canada, play off today as well and the winner moves on to play the loser of the one-two game. The winner of that one plays in the final on Sunday evening. Sounds complicated, but it means Team Homan has two cracks at making the Sunday final. They're looking strong.

I've spent my mornings reading Awesome Authors' stories - all 200 of them!  I'm almost through these ones and will await the scanned entries. I've created a shortlist for each age group and will reread these ones to pick the winners. Needless to say, I haven't had a chance to do any writing this week, but will be back at it this upcoming weekend. I'm carving out some time to finish the Dundurn manuscript, my next goal. I heard from the Grass Roots publisher and she is hoping that I can write the Anna Sweet sequel this spring. That is my next, next goal.

It's been great to spend the week in Kingston, where my current manuscript is set. The weather here is changeable and damp with a cold wind blowing off Lake Ontario. I lived here for a year when I went to teacher's college and had forgotten how bitterly cold that wind can be while the slush and ice make walking treacherous. Like most Canadian cities and towns, Kingston is a much better summer destination.

Anyhow, some good curling ahead this weekend and then home and back at the writing desk. I'm looking forward to both.  Wishing everyone a good week . . . .
Posted by 7 Criminal Minds at Saturday, February 23, 2013 No comments:

Something of a productive week. I surpassed the 60,000-word mark on my latest manuscript, and so far, it's coming together. I'm heading into the final climb to the climax and resolution. Endings can be as tough as the middle section. There is a temptation to explain how everything happened, which is not the best way to tie the plot together, in my view. I wrote a cover blurb for this one even though it's not complete. The editor is going to pitch the story to the editorial board, maybe as early as next week. It would be wonderful to finish it knowing that it was lined up for publication.

I saw the cover design for My Sister's Keeper, coming out this fall from Grass Roots Press and like it a lot. It's very different from any of my other covers thus far. I also finished the cover blurb for this one a few months back. My next project is to write the sequel and I have a contract for this one already!

So, lots happening on the writing front.

And, the Awesome Author contest short stories arrived electronically a couple of days ago - all 200 or so - but this isn't the entire lot. The hard copy entries have yet to be scanned and those will be arriving shortly. Three age categories from ages 9-17. Lots of reading ahead. Luckily, I can take the stories with me on my laptop as I set out to watch a whole lot of good curling in Kingston. It's Scotties week and curling fever has hit Ottawa clubs. Not only are the women's Nationals a two-hour drive, but Ontario is represented by Ottawa's Team Homan with our daughter Lisa at lead.

It also is fortuitous that the manuscript I'm working on is set in Kingston so this is a great opportunity to take more photos and to soak up the atmosphere. I'm certain we'll go back to the bar I've already scoped out for the book. It would be great to tour the Police Headquarters, but that is likely difficult to line up. I was turned down by the Ottawa Police. Luckily, I have found a retired police officer named Damien Coakley, who read the manuscript and corrected some of my faux pas. He gave me some great insights and feedback.

So writing, reading, judging and curling this week in amongst the socializing and kicking up of the heels in the Heart Stop Lounge. These curling events have bands playing every evening and a week-long party.  Curling fans come from across the country to cheer on their province. It's a great time if you have a chance to take in a Scotties or Brier. 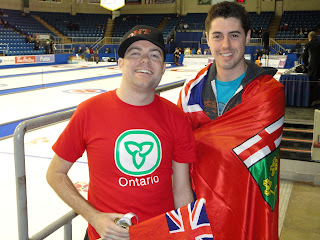 Posted by 7 Criminal Minds at Saturday, February 16, 2013 No comments:

Ottawa was not spared from the massive snowstorm spiraling up the Eastern seaboard.  All day yesterday, blowing snow made travelling a chore while the wind chill kept temperatures below twenty. As I rode the bus to work, I remembered a poem that I studied in university. In fact, I often think of it as we trundle along Scott Street and the high rises of the downtown come into view with plumes of smoke hanging in the sky on a cold winter morning. Let me give you a few lines of "A January Morning" written in 1900 by Archibald Lampman.

The glittering roofs are still with frost; each worn
Black chimney builds into the quiet sky
Its curling pile to crumble silently
Far out to westward on the edge of morn,
The slender misty city towers up-borne.

Writing has been going well. I finished the synopsis for the manuscript I'm working on and got that into the editor. That took me most of Sunday. I also came up with a title but will wait a bit before sharing it with you - one never knows.

I'm now working on filling in an author grid for Dundurn, which is used for publicity. I'm also plugging away at the manuscript because I'm going to have a new task beginning Monday when the Awesome Author short stories will be arriving for me to judge. Last year, I had 150 stories in three categories to read and ponder over. This year, they'll be sent electronically instead of as hard copies. I think this will be easier in the long run. I only have a few weeks to finish the judging, which is probably a good thing. I'll have to focus.

I also received some images for the cover of My Sister's Keeper - the adult literacy mystery for Grassroots Press. I'm excited to see the designer's creation. I believe the title will also include An Anna Sweet Mystery. My next project is to write the second in the series. I've got some ideas perculating.

So, I had this dream last night that Michael Connelly and I were at a party and he offered to write a blurb for the cover of my next book. After all, he passed within five feet of me  at Bouchercon, so that makes us what? Almost acquaintances? I think he appeared in my dream because as I listened to the news about that LA cop terrorizing other cops and the manhunt underway this week, it seemed like a plot out of a Connelly novel. Even a snowstorm to hamper their search. Too bad Harry Bosch isn't real. Too bad my dream wasn't real either.

Posted by 7 Criminal Minds at Saturday, February 09, 2013 No comments:

So if you followed last week's blog post, you know that I was in Waterloo waiting for my daughter Lisa and Team Homan to play the semi-final match in the Ontario provincial curling playdowns. I'm happy to report that they were victorious and won the provincial title, now advancing to the national Scotties playdowns in a few weeks' time. More excitement and thrilling matches to come! You can follow along on TSN beginning February 16th. 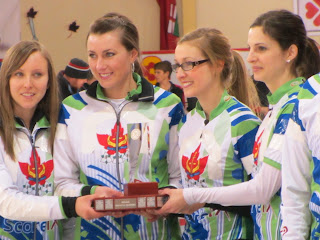 The Team: Rachel Homan, Emma Miskew, Alison Kreviazuk and Lisa Weagle
It's been a productive week as I've managed to get writing in every day as I awaited feedback from the senior editor at Dundurn about the first four chapters. At our Capital Crime Writers Christmas dinner, Tim Wynne-Jones gave a satirical 'diary' reading on his angst waiting to hear if the publisher liked his latest submission. He captured that we read signs as every day passes, first believing our work is Noble-prize worthy until  convincing ourselves that the writing  is so terrible the publisher can't even express their revulsion in an e-mail. Our self-confidence is precarious, ready to be toppled like a house of cards at the first sign of rejection. And yet, we keep at it. This writing business is not for the faint of heart.
And so, I waited . . . but only a few weeks. I received the verdict yesterday: the two words "very good" are music to this writer's ears. I now have to get a synopsis together since he wants to pitch the manuscript to the editorial board right away. I also have to think of a title - my least favourite and most torturous part of writing a book. This morning, I lay in bed, running words around in my mind and trying to come up with something appropriate but catchy.
Nothing. not even a nibble.
I'm now at the 55,000 word mark in the story and eager to pull all the parts together. More time in the day. That's all I ask. Luckily, the weather is cooperating. Frigid and grey, I've got two full days to stay inside by my fireplace with cups of coffee and warm keyboard. I have some time to kill . . . (say, could I work that into a title?) (Killing Time?) (When It's Time to Kill?) This is going to be two days of seeing titles around every corner and rolling words around on my tongue. But I know, the perfect title is out there, waiting to be pounced on.

The calendar has turned a page into February - the last hard blast of winter enters its final weeks.