Cold Mourning in the Stores!

I was expecting my author copies of Cold Mourning to arrive on my doorstep this week, but so far, the package has not arrived. I see that the book is now available on Amazon and sales are looking encouraging. My publicist sent along an e-mail to say that iTunes has given the book a 'brick' on its sales page. If you've never heard this term before, you are not alone. A brick is a larger icon and mine is sandwiched between Denise Mina and James Patterson. This book business can still give a thrill:-)

As those of you who follow the blog know, I am heading to Left Coast Crime in Monterey, California in late March. As an author, you attend these conventions to introduce readers to your work and to make connections in the book industry, including making friendships with other authors. The conventions have a series of activities going on throughout a three- or four-day span. Author panels are a staple of each day. I've received my assignment - two panels, both filled with fabulous authors:

First, I have to congratulate and to acknowledge the terrific week that Team Homan had at the Scotties, Canada's national ladies' curling competition. Not only did they win every game over the round robin and playoffs, but Rachel never had to throw her last rock in any game. It's like throwing a no hitter, but more so. Now, they head off to Worlds in St. John, New Brunswick beginning March 15. More fine shot-making and excitement to come!

I'm back into more concentrated writing on my latest manuscript. I received word that I should have a draft completed by June so I have to pick up the pace. I'm now closing in on 36,000 words and want to be at 40,000 by the end of February. I have the next few sections mapped out and am ready to get at it today.

I also received some lovely review feedback on Friday. Quill and Quire, Canada's book industry publication, reviewed Cold Mourning in their March issue, just out. I hope that the entire review is posted on their website, but am not sure how they select these. Some words used to describe the book are 'fast-paced' and 'suspenseful wintery mystery'. Another well known reviewer let my publicist know by e-mail that he is writing a review and thinks this is 'a hit series in the making'. Words to make my heart swell :-)

Dundurn has sent word that copies of Cold Mourning arrived in the warehouse on Monday. This means that they'll delivering them to stores now and my author copies will be arriving early this upcoming week. I've been sending out invitations to the March 9 launch at Whispers and will continue to send them out as I have time. You can help spread the word. 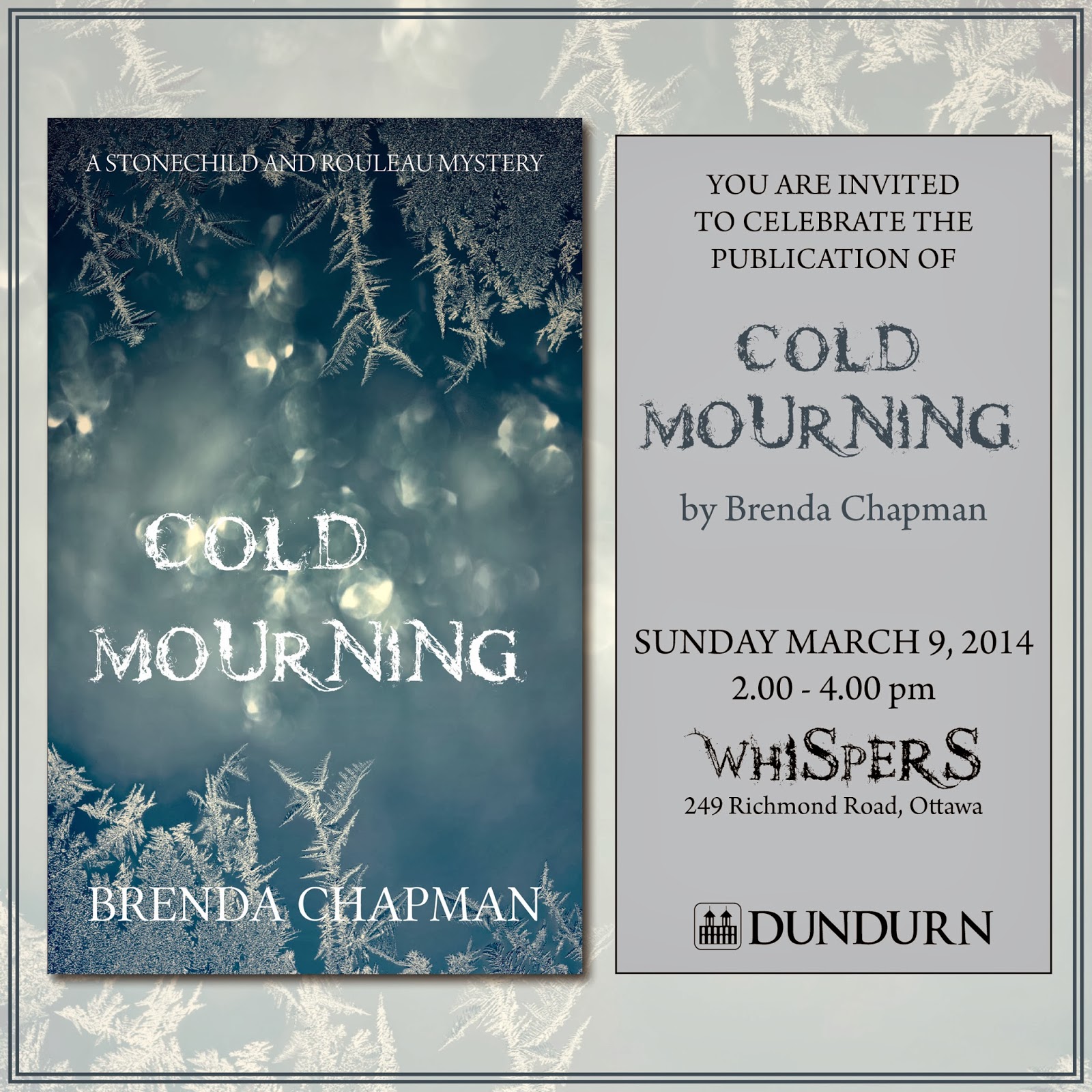 Dundurn also posted a couple of interviews this week: one with me and one with my editor Jennifer McNight.

So, all in all a very good week even if the weather continues to be lousy. If you are like Ted and me, you're sick of the snow and cold and missing sunshine. Talk of moving to Equador has gone from back burner to simmer although I'm sure spring weather will end the musings for a while. I do have that week in California coming up in a few weeks.

Guess I can hang in until then.

Posted by 7 Criminal Minds at Saturday, February 15, 2014 No comments:

Picking up the Pace

Anyone following my blog knows that my daughter Lisa Weagle is curling with Rachel Homan, Emma Miskew and Ali Kreviazuk in the Scott Tournament of Hearts in Montreal. Some of our neighbours came over last night to watch the one/two game against Team Carey, who represents Manitoba. What a hard fought, nail-biter game. Both teams curled unbelievably well, but when it came down to last rock, the Homan team perservered. Rachel made a brilliant draw to force Carey into a tough shot. All orchastrated by two brilliant tick shots by Lisa Weagle to keep the scoring centre open - in the curling world, Lisa's become rather famous for perfecting these shots, now called 'the Weagle'. I'm sure they could hear us cheering for Lisa and the entire Homan team in Montreal.

So, back to my writing world today - a small respite before the final tomorrow night, which will be shown on TSN. It promises to be a fabulous game if you can be there in person (like us) or watch the excellent coverage on TV. It's going to be hard to get my mind off curling, as you can imagine:-)

Anyhow, the section of the manuscript that I'm working on lately has my cops visiting Montreal and has grown to a couple of chapters; however, today, they will be heading back to Kingston. I've been planting clues and setting the stage for the next chapters, which have formed vaguely in my plotting brain. I'm excited to get this storyline moving along, now at just over 33,000 words. I heard from my editor and she suggests aiming for June to submit this manuscript, so I have to pick up my pace.

You can help me out by making Cold Mourning a bestseller so that I can quit my day job. Wouldn't that be a luxury to have all day to write?

Three weeks to Cold Mourning's wide release. I understand that the book is shipped to stores three weeks ahead . . . which would be today! The publicity is also beginning for the 2nd in the series called Butterfly Kills. I came up with this title and wasn't sure if we were going with it, but since I see it's on Goodreads, I guess we are. Here is the cover synopsis:

I'm pretty fond of this book too. It was a complicated plot to handle, but came together as I had hoped. My former editor Allister Thompson gave the manuscript a read early on and said he wondered as he was reading it how I was going to pull the plotlines together. He said when he finished, it all worked and he had no suggestions for improvement. Sort of a Weagle moment.

I'll be sending out more Cold Mourning launch invitations this weekend between writing and curling watching. Lots of people tell me they'll be coming by to raise a glass at Whispers on March 9 - I hope you can be one of them :-)
Posted by 7 Criminal Minds at Saturday, February 08, 2014 No comments: