Last weekend in June. My goal is to be at 70,000 words on the latest manuscript; I am at 67,000. Luckily, I have this weekend to lessen the gap. The plot appears to be coming together. I've jotted some notes that give me a bit of a roadmap.

I spoke with a reporter from Ottawa Magazine this week - he contacted me to be part of an article for the October issue. Lots of information and interesting articles on their web site that you might want to puruse. Two caught my eye: The Opinicon update - I've been following the sale and renovation of this old inn in Elgin on the Rideau Canal system and think it would be a great spot for an overnight getaway in the fall.  Also interesting is the article about a local Westboro shop called Chez François - I've bought bread and numerous gifts from this charming store and had no idea that François and his wife make all of the pasteries and bread as well as many other foods. If you get the chance, drop in. They also serve breakfast and I think we'll have to take a walk to try it out one weekend morning. I'm also thinking these chocolate lime curd tarts need tasting!

I'm going to be appearing on CKCU's Literary Landscape on Thursday, July 9 - The station is 93.1 on the FM dial if you're in the Ottawa area.

Well, the day is beckoning - sunny and warm to end out the month. I'll be writing and taking breaks to work in the garden. This has to be the best time of year for those of us living in the north. 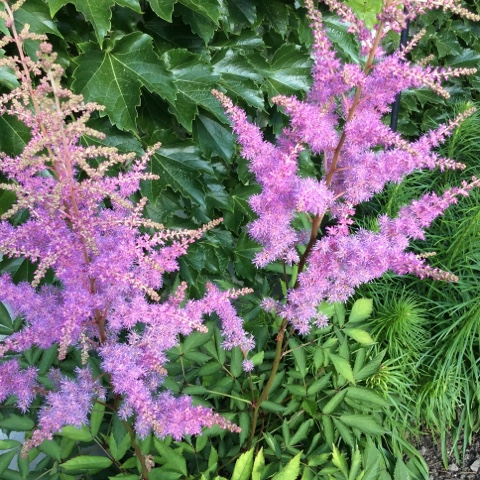 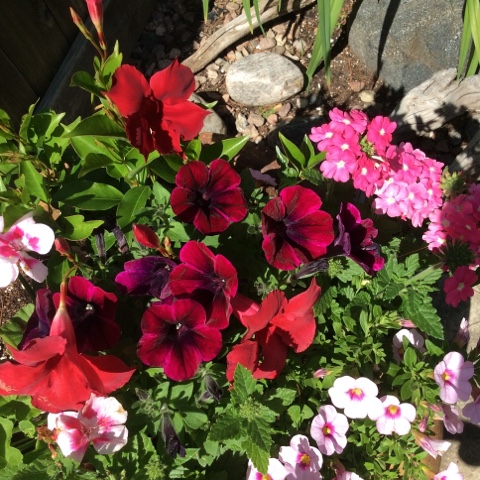 Oh Canada - the Beauty and the Mystery

With the final editing of Tumbled Graves, I've fallen behind in reaching my weekly writing quota so this weekend is finding me at the keyboard. I worked last evening after work and will soon be back at it after a couple of cups of coffee and a walk around the garden. I'm at 64,000 words, aiming for 90,000...my deadline for submission is September 1st.

One thing I've been meaning to mention to you -- websites have been popping up with 'free' downloads of my books as well as many other authors' books. While this might be tempting, the sites are not legitimate and are only after accessing your personal information. Never click on the download link! I've reported some to my publicist, and they've sent a letter warning the site to come down, but after one site comes down, another pops up. They're like mushrooms after the rain. No current author with a publishing house that I know of will have their books as free downloads. I think we need to spread the word.

I read a post on Facebook from an American author asking her friends if she should write a book set in Canada. Would anybody buy the book? This is a reoccuring issue at panels and even in discussions amongst Canadian mystery authors. I had an agent who advised me to set my first adult mystery in the U.S. and so In Winter's Grip is set mainly in Minnesota although also Ottawa. I'd point out that the town I invented, Duved Cove, is close to Lake Superior and not far from the Canadian border, displaying my ambivilance about the need to go outside my own country. Since this book, I've set all my books in Canada, moving closer to home to Ottawa, Kingston and towns and cities in Southern Ontario and into Quebec - my stomping grounds. 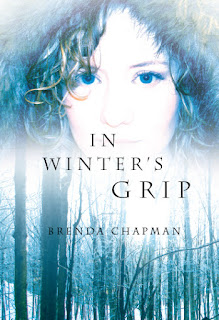 My good friend Frank Bowick took the photo of the trees used on this cover -
Frank took the photo in Algonquin Park in Ontario.
And my thoughts on setting books in Canada? I think the interest in our literature will increase much like the upsurge in Canadian music. When I was younger, Canadian musicians that 'made it' on the world stage were few and far between. Ann Murray and Paul Anka come to mind. Not many others. Now, Canadian musicians are  respected around the world with many solid careers and wide audiences. I also look at  the Scandinavian countries and the popularity for their murder mysteries, which seemed to happen overnight; however, you can bet that their authors weren' questioning whether they should be writing about their own country all those years before being 'discovered' by the rest of the world.

So, I think we have to keep writing about the country we know and love, and take every opportunity to promote our work to readers outside our country - that's where our Canadian readers can make a huge contribution - recommend books you enjoy to friends and on social media. I know that some of my readers have sent copies of my books to friends in other countries. Every new reader keeps us writing. I was on a panel with four American authors at Malice Domestic this spring and was pleasantly surprised to hear the moderator refer to Canada as an exotic setting, showing once again that one person's fish eggs are another's caviar. 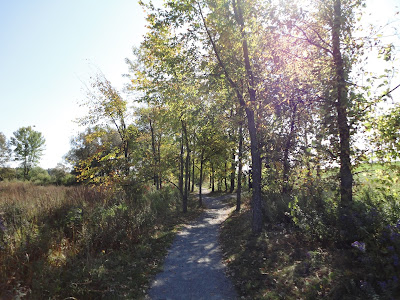 Setting for a murder in Cold Mourning on the Rideau River.

Near Picton, Ontario - many mysterious nooks and crannies across the country!
Posted by 7 Criminal Minds at Saturday, June 20, 2015 No comments:

Prose in the Park last Saturday could not have happened on a better day - sunny and about 24 degrees, it was a jewel of a day. I was at the Capital Crime Writers tent all afternoon and it was great to see some of my author friends before we all go our separate ways for the summer. We sold lots of books as people stopped on their way by to chat. At three-thirty, I was on the south stage on the Deadly Intent panel, which had a full audience that stayed the duration. All in all, a great day in a great location. 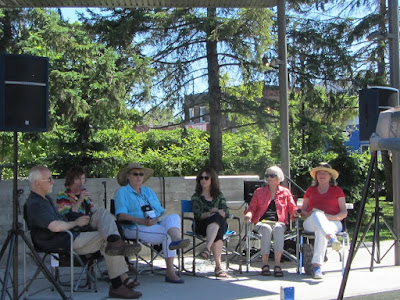 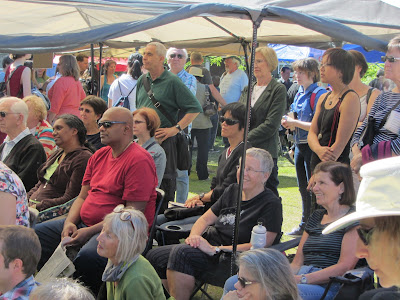 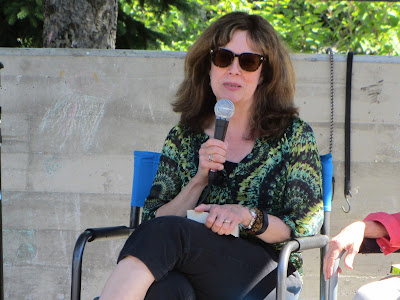 I've been working every evening on the final edit of Tumbled Graves. My revisions are due Monday and I have about a hundred pages to go. I'll be finishing that tomorrow because I'm heading out soon to Indigo Barrhaven where I'll be signing books from 11-2. The woman organizing this has ordered my YA mysteries as well as the adult so hopefully readers will stock up on summer reading!

Not much writing on my latest manuscript so I'll have to pick up the pace next week. June is turning into a busy month....
Posted by 7 Criminal Minds at Saturday, June 13, 2015 No comments:

I'm a slow-moving bunny this morning, but I have been to the Parkdale Market to drop off some books for Prose in the Park. This is the first outdoor book festival in Ottawa for some time (if the first ever) and is being held in the park next to the Parkdale Market and the place is already abuzz with authors setting up their books on tables under tents - two stages at either end of the park for panels with the day getting underway at 11:00 and running until 6:00 this evening. I'm on the crime-writing panel at 3:30 under the title "Criminal Intent". The day is entirely free so come by and check it out. Chairs are already set up in front of the stages so you can relax and take in the panels. The Market is also next door to pick up some fresh produce for supper or flowers to plant in your garden. I'll be heading back around 1:30 if you want to come chat or pick up a signed copy of any of my books :-)

I've been plugging away daily at the latest manuscript, meeting my daily and monthly targets, which is a good thing since the final proofs for Tumbled Graves arrived yesterday and I have just over a week to go through them. It's very cool to see the text all laid out in book format and to know that soon reviewers and bloggers will be reading the advance reading copies. Cool and nerve-wracking at the same time. On this go around, I'll be looking for typos and incorrect sentences, that sort of thing. My editor said that she was happy with all of my final edits in the last version and had no changes to my changes. And on we go...

Next Saturday, I'll be at Indigo Barrhaven from 11:00 a.m. to 2:00 p.m., signing books so come by and keep me company if you are in the area. This will be my final book event until mid-August.

I'd like to acknowledge the hard work by Capital Crime Writers president Michael Murphy - a retired librarian at the central Ottawa branch, Michael has worked hard behind the scenes to keep CCW going over the past few years and he is on the planning committee for today's Prose in the Park event. He's travelled to Perth to sell our books and is manning the booth today - all volunteer work and he doesn't even write! I was at a signing at Perfect Books last year and he came by to support me and even bought me a copy of The Last Policeman by Ben H. Winters because he thought I would enjoy it. (It is excellent by the way).

Well, this bunny better get at something productive before it's time for me to head back to the Market. I hope to see you either this weekend or next.
Posted by 7 Criminal Minds at Saturday, June 06, 2015 No comments: