It's Heating Up in Waterloo

Writing hasn't gone so well this week since we are in Waterloo watching our daughter Lisa curl in the Ontario Scotties (provincial) playdowns. The winning team advances to the Scott Tournament of Hearts in Kingston in February. Our team, with skip Rachel Homan, has done brilliantly so far, winning the round robin with a perfect 9-0 record. They play in the 1-2 game this afternoon. Winner goes on to the final on Sunday and loser plays the winner of the 3-4 game. So lots of excitement and lots of nail-biting yet to come.

I have been involved in some e-mail conversations about the cover design for My Sister's Keeper (Grass Roots Press). A designer is currently working on the project and we're at the stage where we're looking at the look for a series since this is the first book with more to come. A cover can mean the difference between someone picking up a book or not. I think of my own reading habits when browsing in a library or bookstore. I look at the cover, read the cover blurb and then the first page. Sort of like dating, back when I used to date.

Work is also beginning on Cold Mourning (Dundurn). I've gotten the editing schedule and have been asked to fill out a publicity grid, something I'll have to get cracking on when I return to Ottawa. I've also submitted the first few chapters for its sequel and now have to write a plot synopsis. This is when it gets busy and I would love to be home writing full-time. I wonder what that feels like - no rushing to work five days a week and coming home too tired to write. No wondering how I'm going to fit everything in. I think I'd be one happy puppy.

Cold. It has been exceedingly cold in this end of the world. Minus 40 C with the wind chill the last few days in Ottawa. It's been slightly warmer here in Waterloo but still frosty. The B & B where we've been staying backs onto the woods and has a beautiful indoor pool with tall windows looking out over the trees and snow. It's a treat to lie on my back in the warm water and see the pale winter sun through the trees just outside.

Well, time to get myself moving and get the day underway. First, breakfast with the team and then a day at the curling club. Wishing for good curling today and tomorrow . . . .
Posted by 7 Criminal Minds at Saturday, January 26, 2013 No comments:

Our Wednesday evening gig at the Granite Curling Club was a smashing success by all accounts. City Councillor and good friend Katherine Hobbs introduced the panel - Mary Jane Maffini, C.B. Forrest and moi - and then the questions began:  First from Katherine and then from our audience of approximately 70 people, some Granite members and some visiting book clubs. We managed to slip in brief readings and the hour flew by. 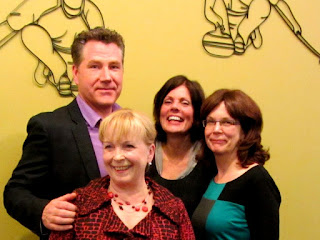 Today, I'm preparing for my library workshop, teaching kids the basics of short story writing. The trick is to make it fun and informative within an hour time limit. Word is that the workshop is full (20 kids) with a waiting list. There are a lot of creative, motivated kids out there. We should all take heart.

Fellow Ottawa author, living just up the street, Peggy Blair blogged a list of the six things not to say to an author. I'm going to flip this idea on its head and write the six things I love about being published - not exactly a reverse flip, but close enough:

1.  Sitting in my office on a Saturday morning with my first cup of coffee, radio turned to the CBC and my latest manuscript on the screen. 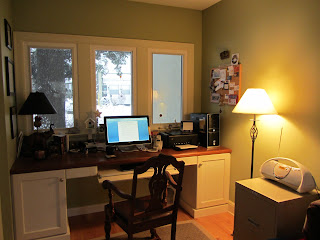 2.  Forgetting time as I slip into a story - housework, worries, paperwork effortlessly fade away.

3. Walking to the pub to meet my writer friend Alex Brett to talk books and writing over glasses of wine.

4.  Knowing somebody I've never met is reading my book at this very moment.

5.  Waiting for the next book cover design to arrive.

6.   That excitement in my belly when the words are flowing and the plot is coming together. As Tim Wynne-Jones once said, "Sometimes you just know when it's working".

And another weekend begins. Coffee is hot. Snow is falling. Fire is on. Life is good.

Last weekend, Ted and I were on the road to Omemee to watch our daughter Lisa curl in the ladies regional playdowns. Omemee is a town of 1200 people, some twenty minutes outside of Peterborough. The 20-minute practice before the first game started at 10 p.m. Friday night and we made it back to our hotel just before 2 a.m. - a gruelling day and weekend all around. I'm delighted to report that the team, skipped by Rachel Homan, won the 'A' side Sunday evening and will be in the Ontario Scotties (provincials) in Waterloo in a few weeks. The 10 top teams in Ontario will be playing off for the one berth to the nationals in Kingston in February.

All this to say, I missed blogging last week since we were on the move for most of the weekend.

The Oscar nominees were announced this week and a colleague at work gave me a funny look when we met up in the hallway.

"What a shock to hear your name called out for best director," she said.

"That would be the other Brenda Chapman - writer and co-director of the animated movie, Brave. She also worked on The Lion King and other major animated flics."
Sadly, not me.

A Hollywood actress sent me an e-mail last year through Facebook asking to meet up for a gala in L.A. She's a friend of the other B.C. and said she realized her mistake before I sent a note to her, letting her know that I was not the Hollywood director. She also said that we look somewhat alike in our photos. Anyhow, the other B.C. wrote Brave as 'a love letter' to her daughter, and was lead director and first woman director on one of the Pixar full-length features until the movie studio bumped her aside. I'm most happy for my name double that her work is being recognized and will be cheering her on Oscar night.

A couple of writing events this week - the Granite fund-raiser this Wednesday evening with C.B. Forrest, Mary Jane Maffini and moderator City Councillor Katherine Hobbs. I'll report back next week, hopefully with some photos. I'm also getting ready to teach a short story workshop next Saturday afternoon at the Carlingwood Library - my neighbourhood branch.

I've also gotten word from Dundurn that Cold Mourning is now scheduled for release in March 2014, so a few months longer to wait. I'll be working with a different editor this time around and the editing timeline has been laid out. They require six months to send advance reading copies (ARCs) to reviewers, thus the later date. I've also been told to send in the first few chapters of the manuscript I'm working on and will be getting that ready this weekend.

So much to do.

The weather in the Ottawa Valley has turned from snow and cold to . . . rain. We have a few days of rain ahead before the temperatures plummet again toward Thursday. Roofs are leaking all over the city and walking is treacherous as roads thaw and freeze and thaw and freeze.

I'm counting the weeks until spring.