Crime Writers of Canada hosted several author events on Thursday evening at various locations across Canada, capped off with simultaneous reading of the Arthur Ellis award shortlists at 8:45 p.m. on the dot. I was part of a panel at Rideau Chapters alongside R.J. Harlick, Barbara Fradkin and Michael McCann, with C.B. Forrest asking the questions and Mary Jane Maffini MC-ing the evening. We pulled in a decent-sized crowd as we discussed our writing processes. Of course, the highlight of the evening for me was having My Sister's Keeper shortlisted in the best novella category! 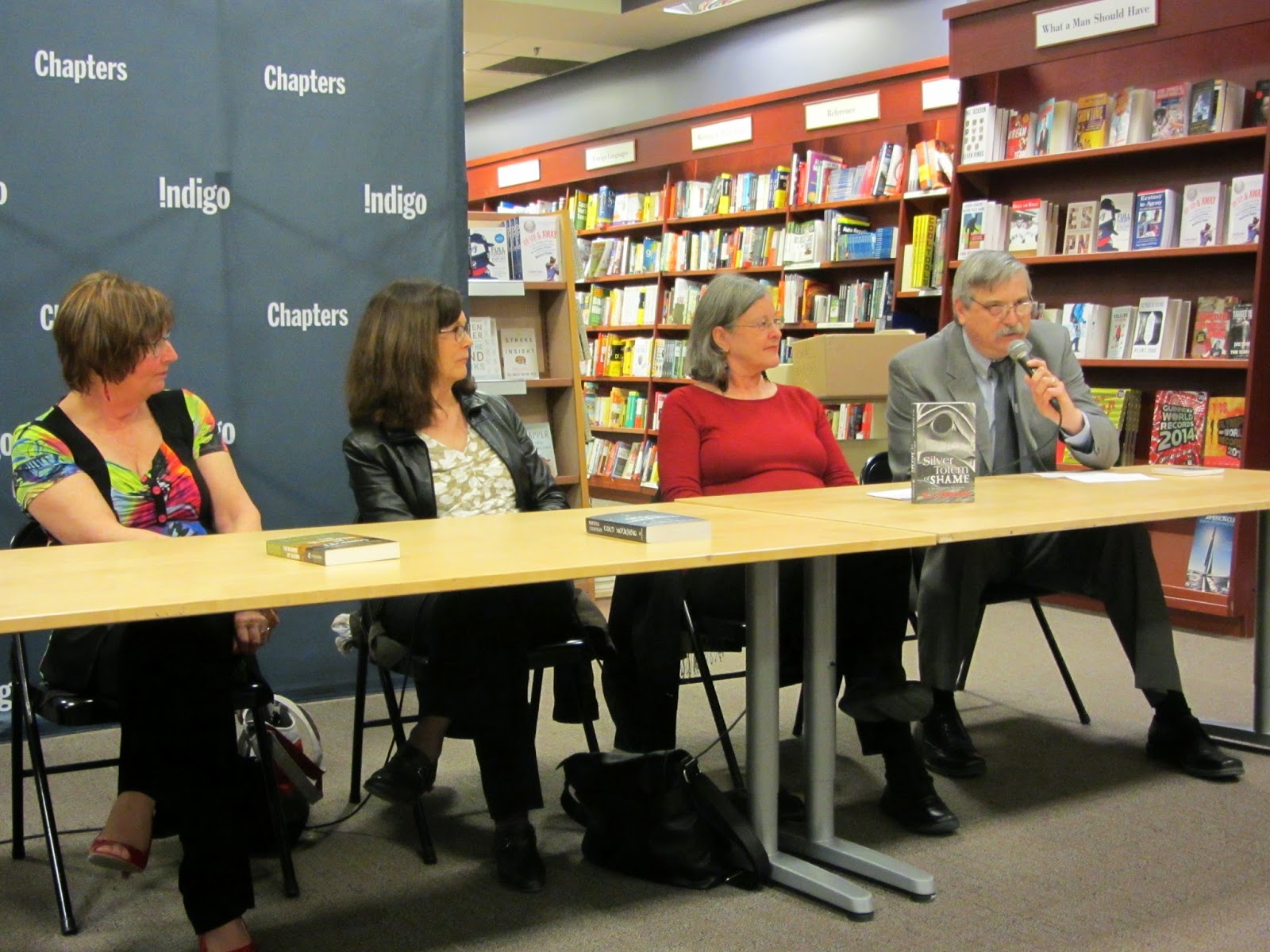 The panel: (l to r) Barbara Fradkin, me, R.J. Harlick and Michael McCann 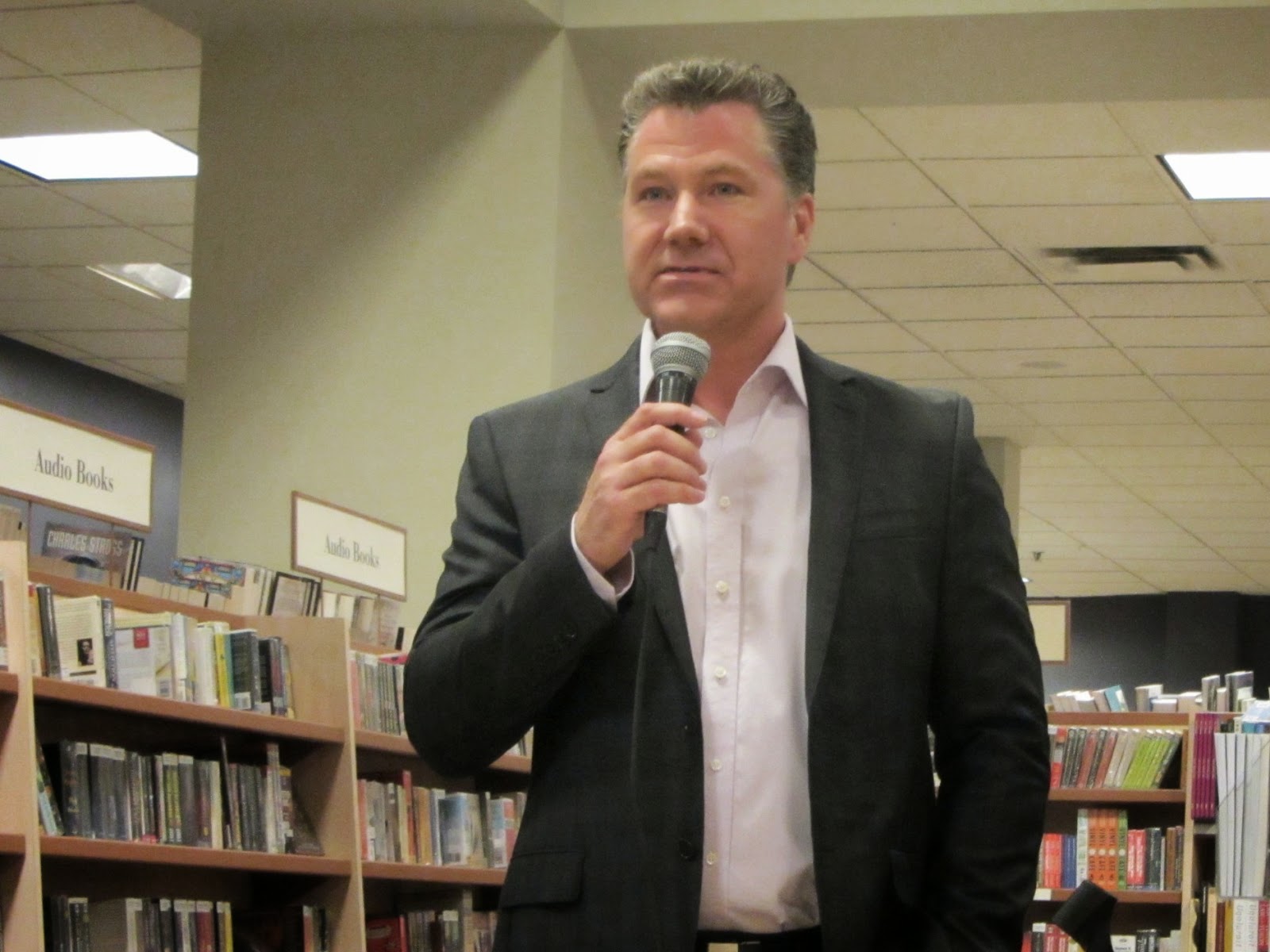 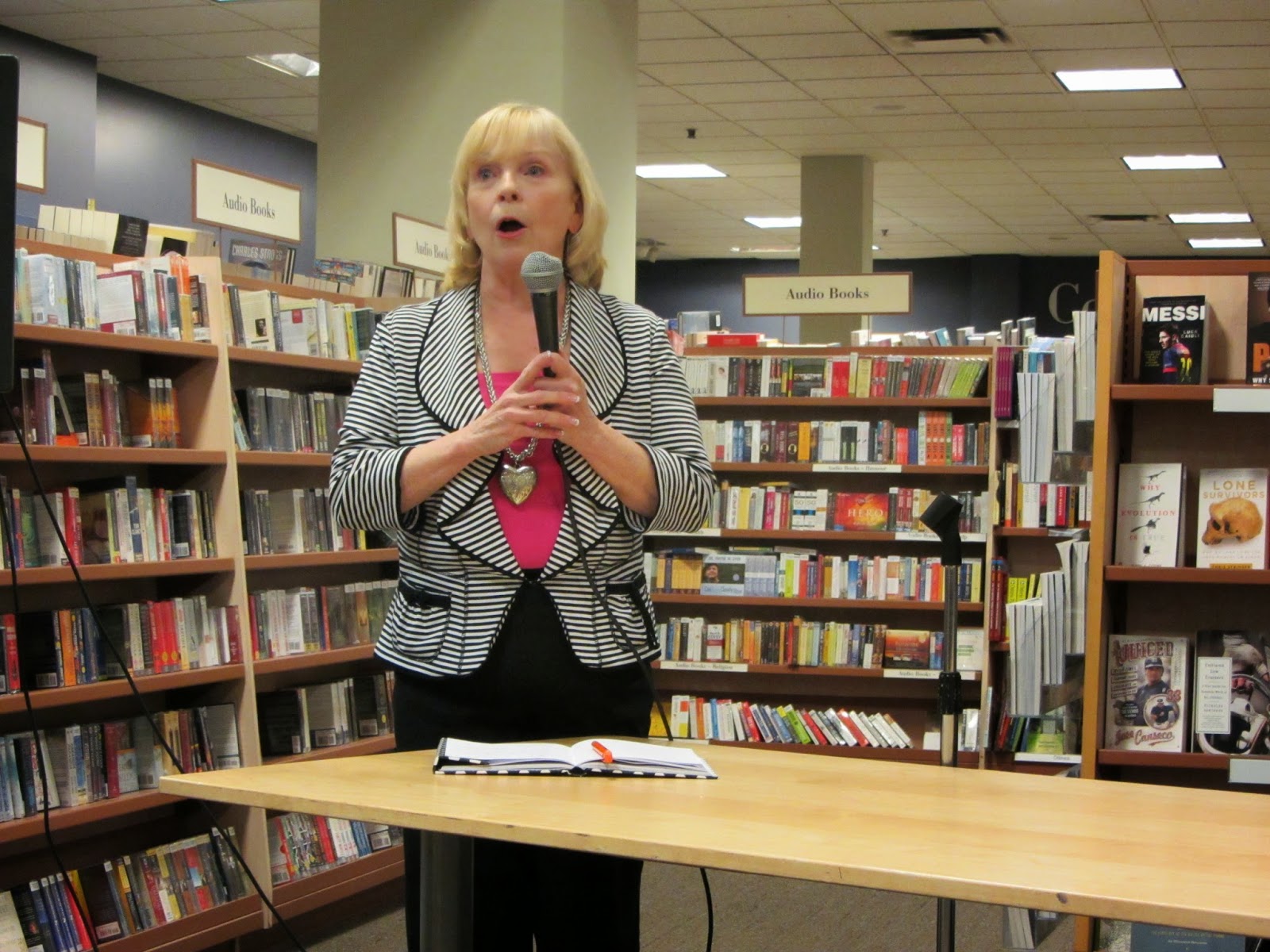 Mary Jane Maffini
I will be going to Bloody Words in Toronto the first weekend in June and the Arthur Ellis dinner is on the Thursday. I wasn't planning to go but have rearranged my schedule to be in Toronto a day early so that I can take part in the evening. I think it's important to take time to celebrate what really amount to acknowledgements that your work is striking a cord with readers. Plus, never hurts to have an evening of food and wine with a room full of mystery authors:-)
A few events first. This coming Saturday, May 3, I will be signing books at Perfect Books on Elgin Street (at Somerset) from 1:00-3:00 p.m. Drop in for a chat if you are out and about.
Then on May 10, I'll be part of the mystery author all-day event at the Ottawa Public Library main branch, which kicks off with Peter Robinson in the morning. You can register for a free homemade lunch and my panel with Jeff Ross and C.B. Forrest will be on at 1:00 p.m. There will be readings by celebrities throughout the day and books for sale. The event, sponsored by Capital Crime Writers and the Ottawa Public Library, is free and you can come for all or part. It promises to be a great day. Click on the Capital Crime Writers link for more information.
Whew - not much time to catch my breath!  I got a good jump on my writing over the Easter long weekend and am heading up to 63,000 words. I figure if I make 80,000 words, this is a good target since I always add more on rewrites. I decided to keep in the development that I thought might be entering the story too early. It seems to be working out, taking the murder investigation in a new direction.
Another cold, wet morning today, perfect for sitting at my desk writing. I have to make a trip to see Linda Wiken at Brittons to pick up some books I ordered. Other than this, I'll be puttering away.
A few people have asked about purchasing copies of My Sister's Keeper. A hard copy can be ordered directly from Grass Roots Press or you can download it from Amazon and other major online sites. The Hard Fall is the second in the series and the third, To Keep A Secret will be released in September. I've grown very fond of Anna Sweet, the main character, who works in Hintonburg, shops in Westboro and hangs out at my local pub Whispers.
Write what you know :-)﻿
Posted by 7 Criminal Minds at Saturday, April 26, 2014 No comments:

A cold Easter weekend but the neighbours are emerging from winter hibernation and kids are playing outside again - I can watch them outside my office window where I do the bulk of my writing. Last week, we sat outside on one neighbour's front verandah under blankets, sipping on wine, trying to catch the warmth from what little sun there has been. Maybe we're like an evolving species, adapting to our changing environment. As luck would have it, the manuscript that I am working on now is set in April so this one is renewing my feel for the descriptive bits.

I managed some writing this week and am now at 59,000 words - not sure if I need to postpone a scene I wrote yesterday. It might need to come later in the plotline so I'll be looking at this today. I'm forging ahead as I've received word from Dundurn that we're going to start editing Butterfly Kills imminently and this will mean that the writing gets put on the back burner. As you can see if you click on the link, Amazon already has the book on sale at a discount - the book business is a whacky world. 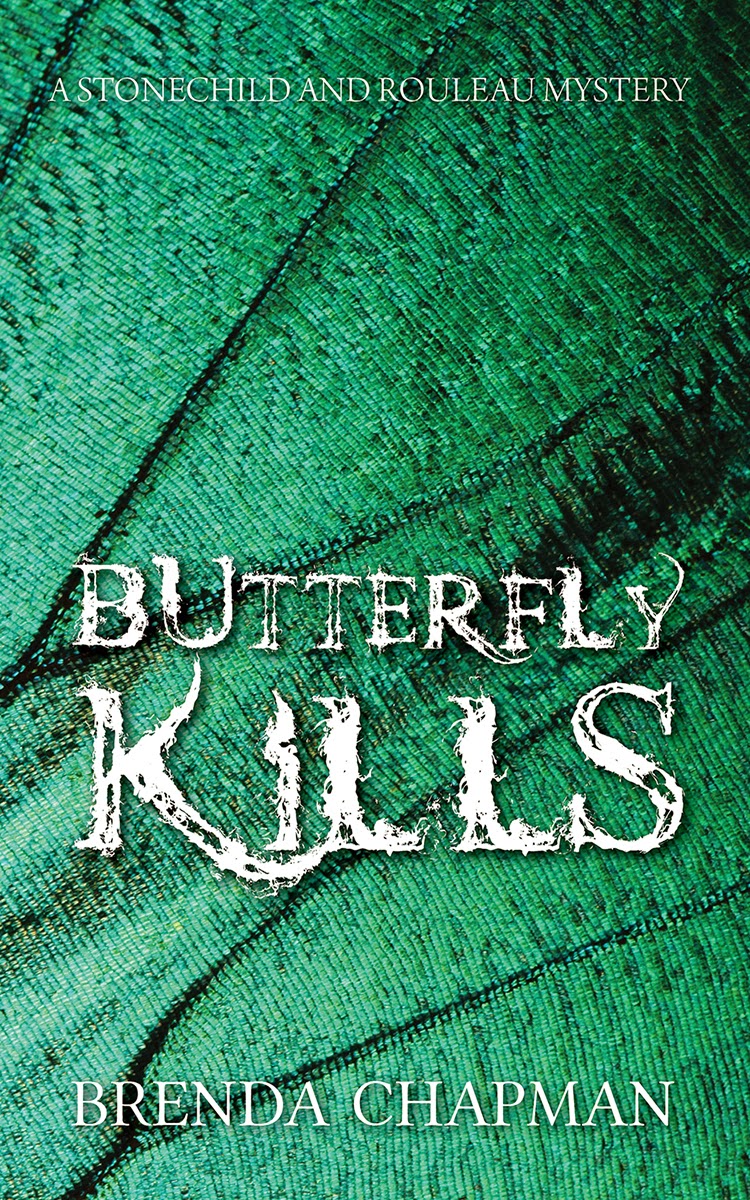 In addition, some author events are lining up, beginning this Thursday evening from 7:30 to 9:00 at Chapters Rideau. Mary Jane Maffini will be MC for a panel discussion to be held on the second floor of the bookstore. C.B. Forrest will be asking the questions, and I'll be alongside Barbara Fradkin, R.J. Harlick and Michael McCann, discussing the topic "What's in the Water?" Crime Writers of Canada is hosting a series of these types of events across the country as they announce the Arthur Ellis shortlist for Canadian crime fiction - these are the national awards handed out annually. So if you are out and about Thursday evening, come by and meet some authors, many of whom are gaining an international following.

Just in - I'll be signing books at Perfect Books on Elgin Street (at Somerset) on Saturday, May 3 from 1:00 to 3:00 p.m. so another chance to come by and get a signed copy of Cold Mourning!

I've got lots going on today. I'm about to head to the market to finish shopping for Easter dinner tomorrow night. Ted already has the prime rib marinating and he'll be slow cooking it on the barbecue. In honour of the Easter bunny, I'll be making a carrot cake. There's also some tire-changing going on and we're planning to find a pub at lunchtime where we can watch our daughter Lisa curl in the Players' Championship quarter-finals in Summerside P.E.I. Unfortunately, Sportsnet is showing the game on a station not in our cable package, thus the need to find a pub. (Some might see this as fortunate.) And then, I'll be back at my desk, working away on the latest book. And there are always my neighbours . . . .

Whatever your plans, I wish you a Happy Easter with friends, family and lots of chocolate. May the spring sunshine soon be with us.
Posted by 7 Criminal Minds at Saturday, April 19, 2014 2 comments:

The Brittons signing was successful I'd say - a few friends who weren't able to come to the launch dropped in for a copy of Cold Mourning and several store customers also bought copies. It's a lovely atmosphere in the store with Linda Wiken as company - she is in charge of the Mystery Bookshelf - and Ted Britton, who is owner and just an all around nice guy. Brittons has every magazine and newspaper you can imagine as well as a good selection of mystery novels so a good place to spend time browsing. 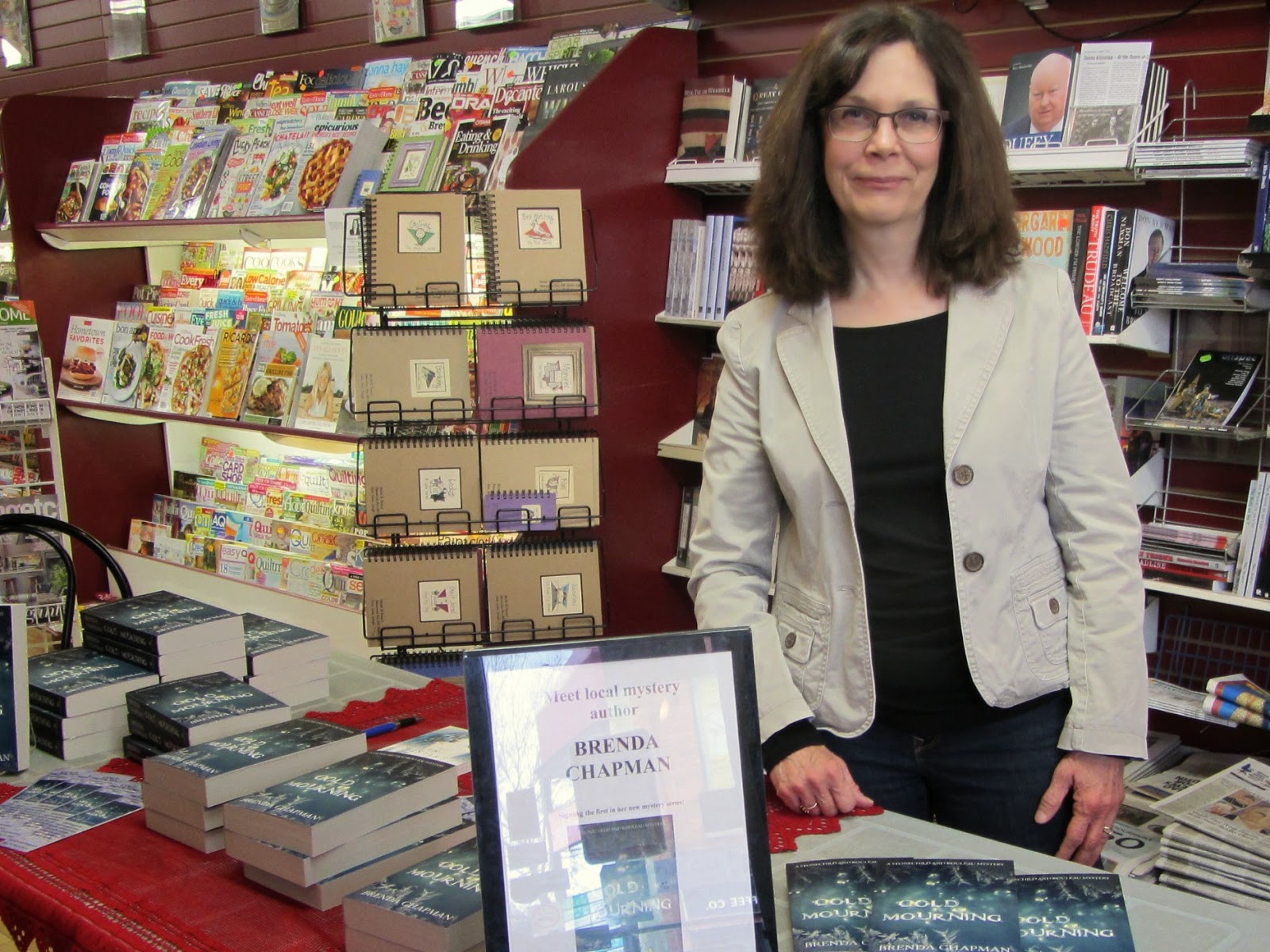 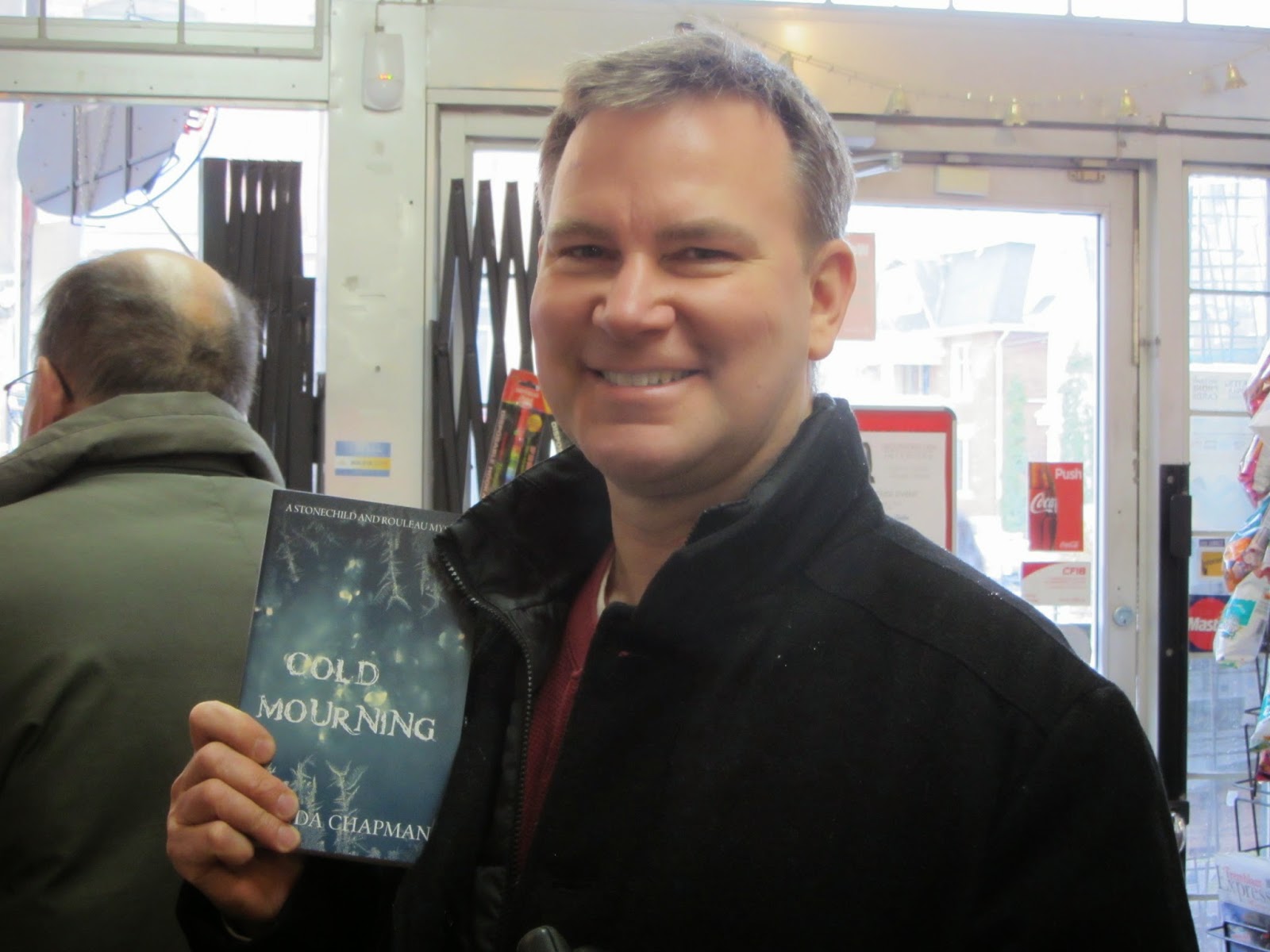 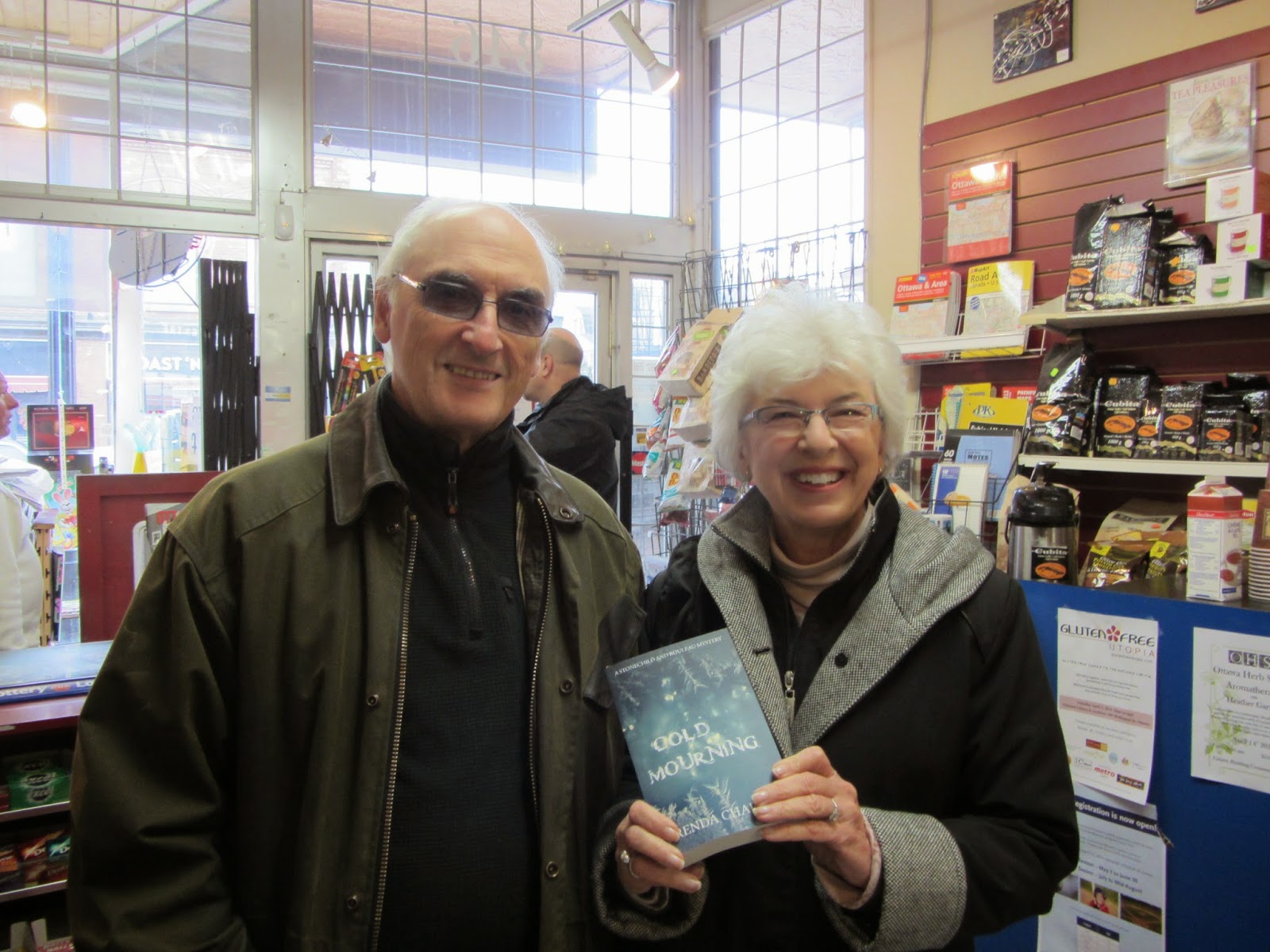 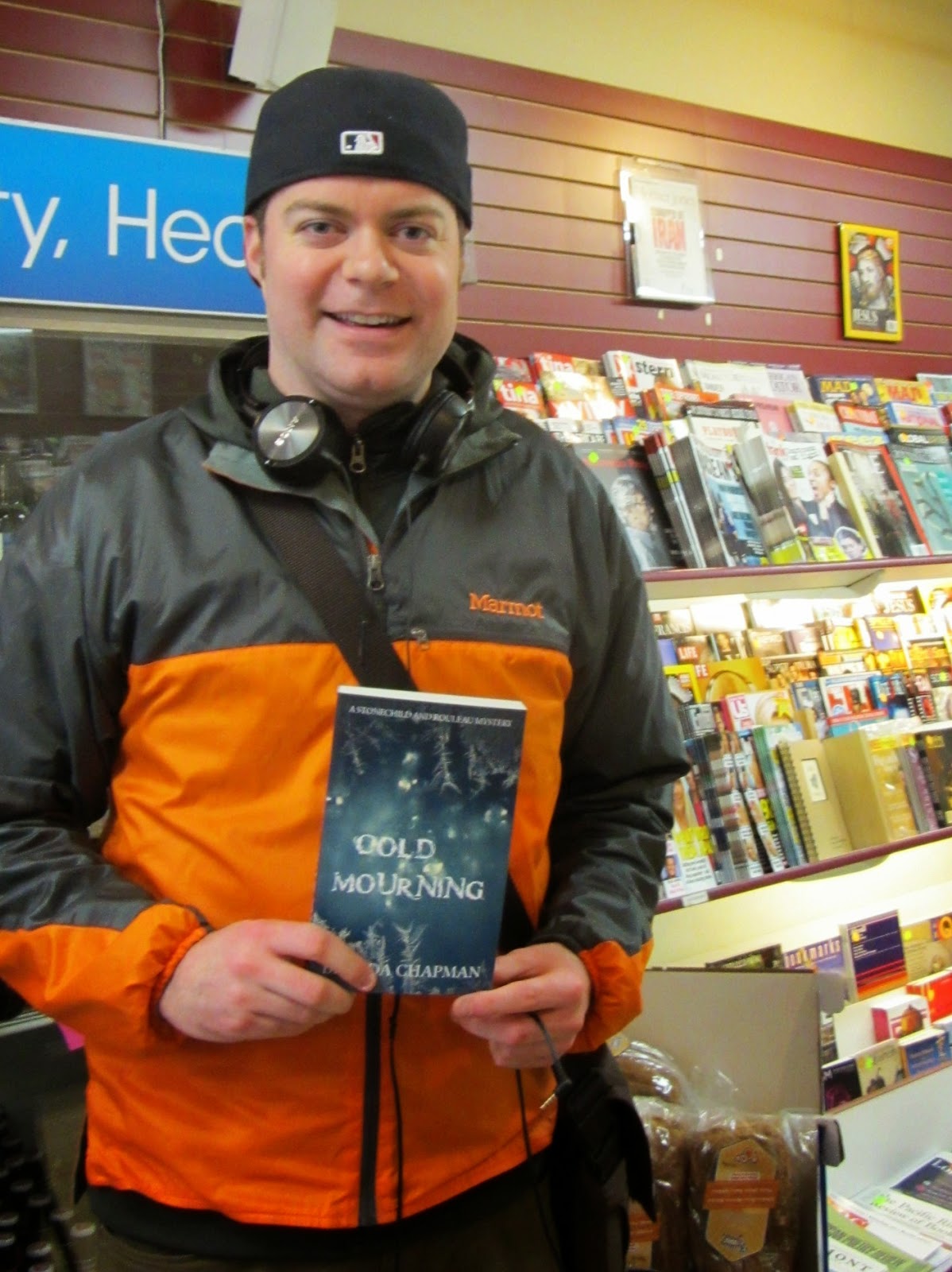 Another good review out yesterday on the Mystery Maven Canada blog. Most heartening.

I met up with C.B. Forrest on Wednesday evening at a Capital Crime Writers meeting and we caught up on our writing projects. Chris has a new website where you can find out about his books, two of which were shortlisted for Arthur Ellis awards. We'll be appearing at Chapters Rideau the evening of Thursday, May 10 (7:30-9:00 p.m.) along with Mary Jane Maffini, Barbara Fradkin, Michael McCann and R.J. Harlick to talk about mystery writing in Canada and to announce this year's Arthur Ellis shortlist for various categories. Everyone is welcome and it would be great to see you.

I'm currently rereading John Steinbeck's Cannery Row after visiting Monterey California where Steinbeck lived and wrote. I remember (vaguely) reading this book in high school and being mightily impressed. As I read the opening chapters, I'm reminded that Steinbeck's grace with words is a thing of beauty. The plot is also coming back to me. Today, I see an article in the Globe and Mail about another of Steinbeck's classics The Grapes of Wrath. Not sure that I ever read it, but now have this book on my reading list. 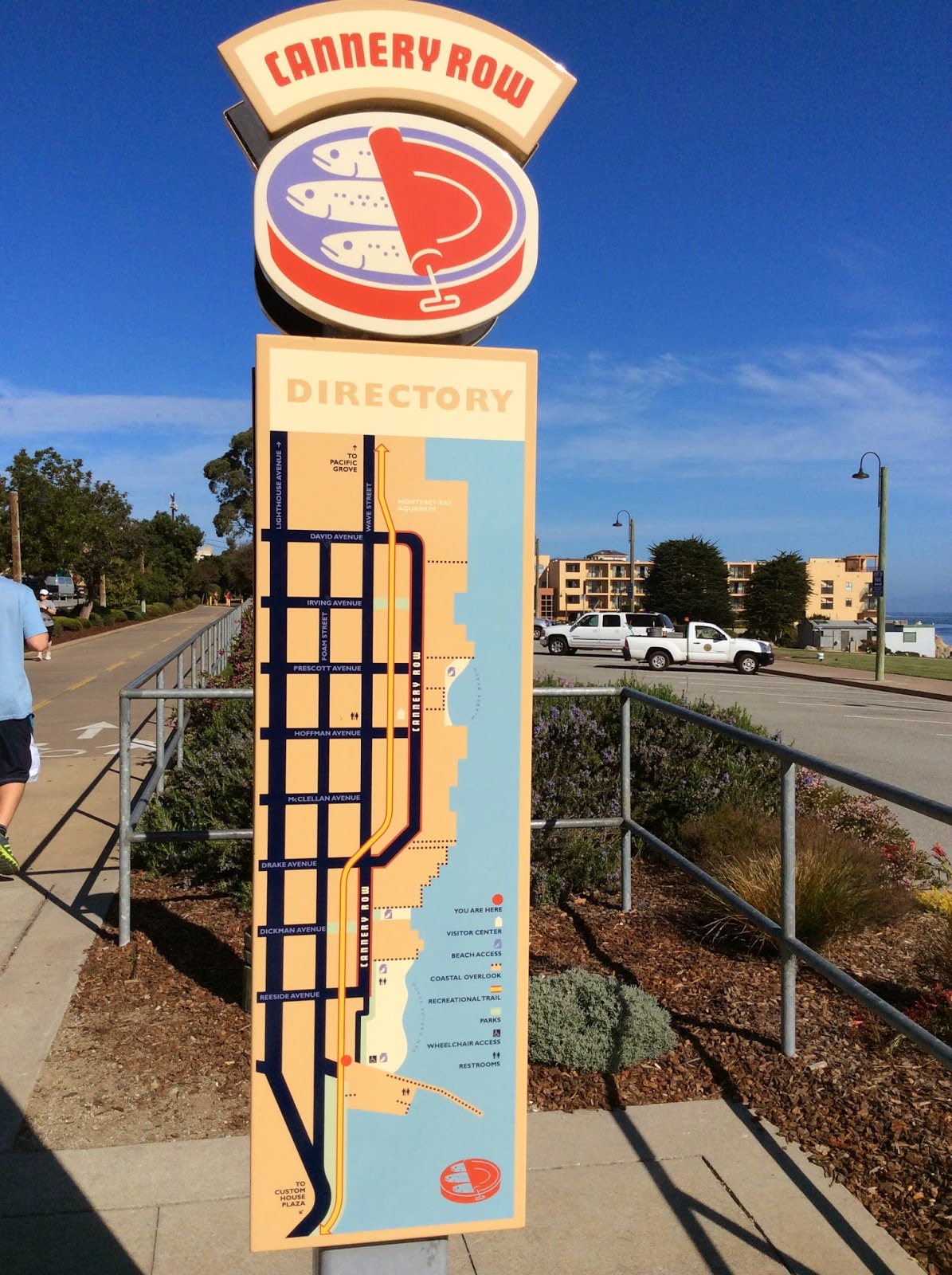 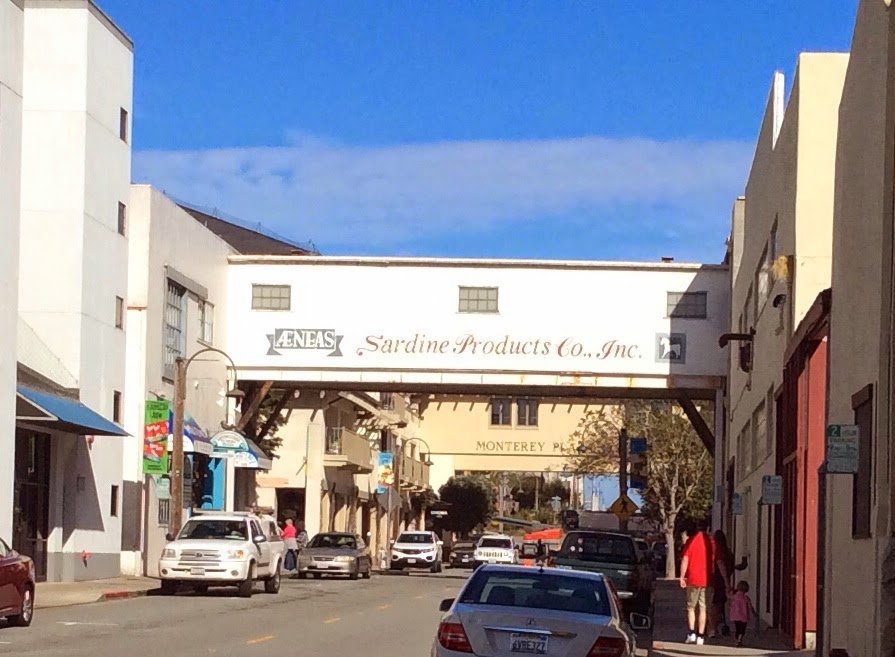 Back to the writing this weekend. I'm plugging along and now at 56,000 words. Time soon to start bringing all the pieces together. This is the most exciting but also the most nail-biting part of the process. It's what keeps me up in the middle of the night :-)

I have a few events on the horizon, starting with today. I'll be signing copies of Cold Mourning at Brittons in the Glebe from one to three p.m. today.Linda Wiken, who used to own Prime Crime bookstore, stocks a wall of mysteries  that make for great Saturday browsing especially since coffee is available.

On Thursday, April 24 from 7:30 to 9:00 p.m., I'll be joining Barbara Fradkin, R.J. Harlick and Michael McCann on a panel called "What's in the Water?" (why so many crime writers in this Nation's Capital?) that will be moderated by C.B. Forrest with master of ceremonies Mary Jane Maffini - we'll be on the second floor of Rideau Chapters. This is a Crime Writers of Canada event, linked with other events across the country to announce the Arthur Ellis shortlist nominations. Other local authors are dropping in so this should be a very entertaining few hours if you are also able to drop by. 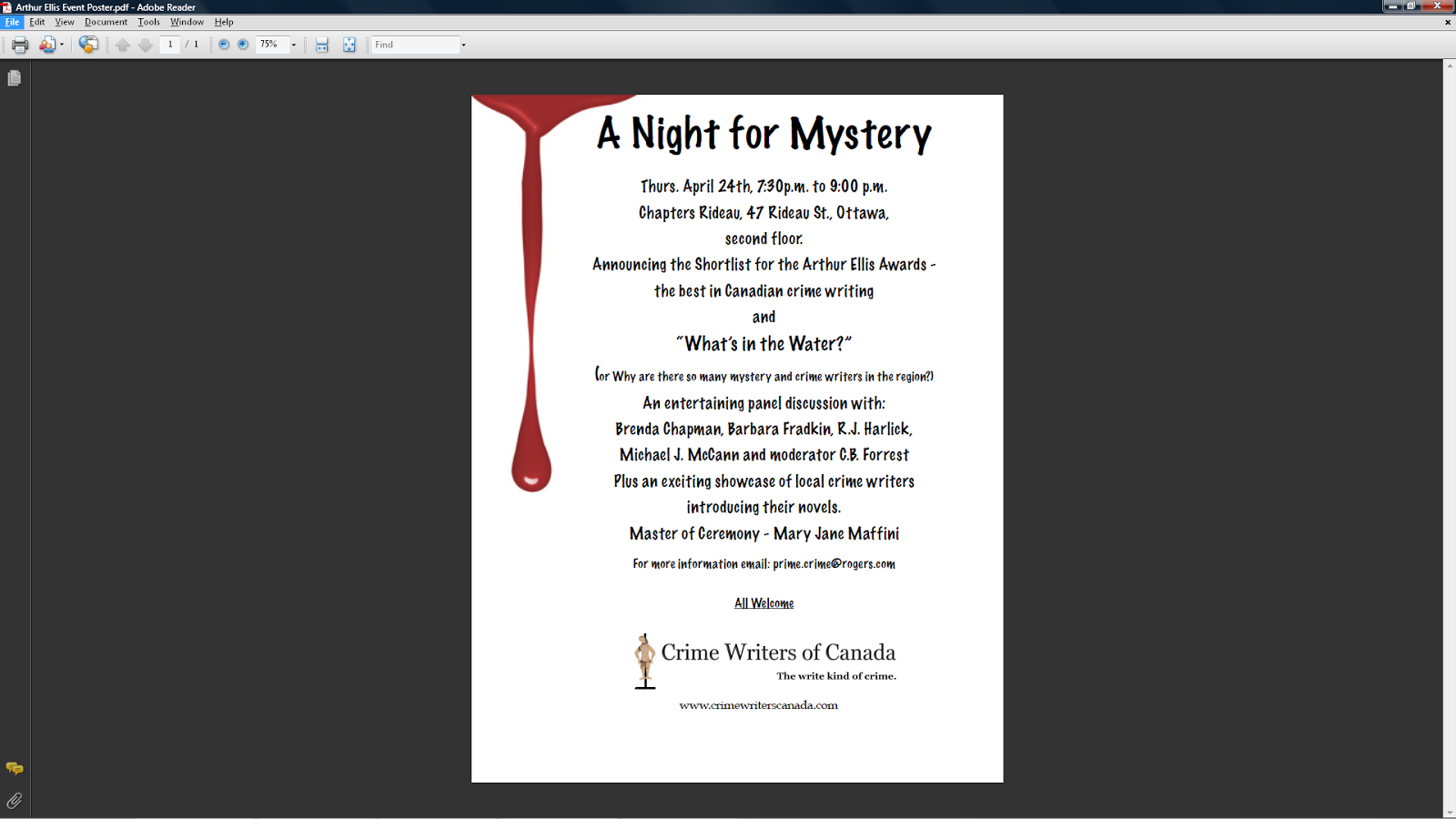 The last event I'll mention today is called Capital Mayhem and it  takes place Saturday, May 10 at the main branch of the Ottawa Public Library. It is a free day of author readings and panels with celebrity readers and special guest Peter Robinson. A homemade lunch is provided, also free. This event is jointly sponsored by Capital Crime Writers and the Ottawa Public Library and open to all. 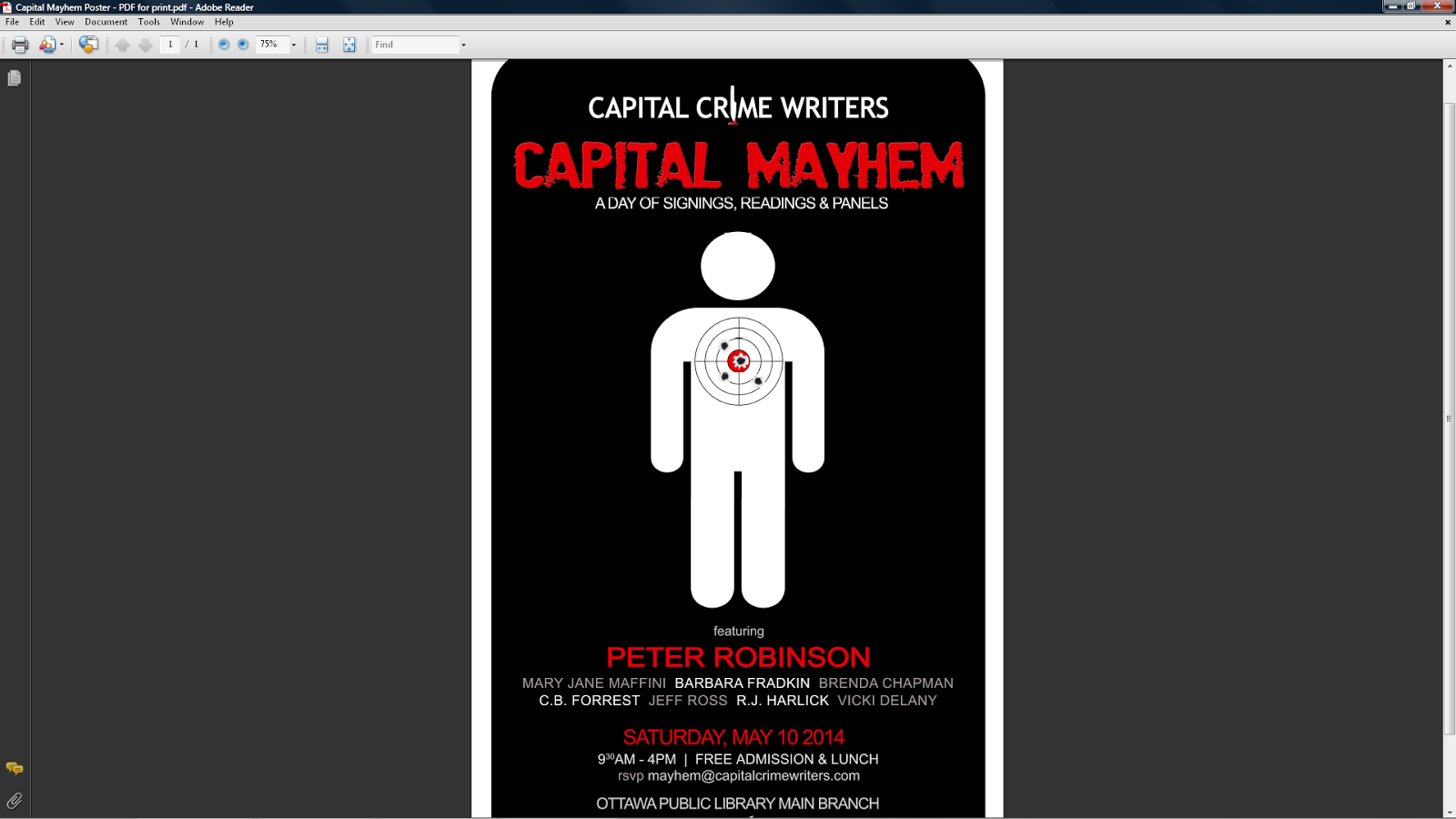 So lots of opportunity to come out and meet authors, talk books and forget that the weather outside is frightful.

I wrote most of last weekend and then ran out of steam during the week. Actually, I spent three evenings reworking one page, trying to get the tone just right. It's quite an emotional scene that I was attempting to underwrite (my term) - say a lot in a few words and let the reader fill in the emotional bits from their imagination. My favourite example of this is a scene in Catcher in the Rye when Holden Caulfield says that he smashed out all the windows in the garage (going from memory here) after his brother died. The image so powerful and raw because he doesn't say how he felt but we all know that his brother's death has destroyed him. One image can give more emotional impact than passages of description.

I've been receiving some heart-warming feedback as people finish reading Cold Mourning and I thank each of you for taking the time to let me know your thoughts or for posting a comment on one of the book sites. I especially like the discussions I've had with different readers about the plot and characters. The consensus seems to be that Kala Stonechild is a complex but likeable main character. I reveal more about her as the books go along and am finding her fascinating too.

Well, I've got lots to do before I head out to Brittons in the Glebe this afternoon so I best get this day underway. I hope you can come by and spend some time this afternoon. Coffee, conversation and mysteries - sounds like a good way to while away a bit of the day.
Posted by 7 Criminal Minds at Saturday, April 05, 2014 No comments: