Lining Up the Projects

Well, the Awesome Author short stories arrived by courier on Tuesday for me to begin judging - all 155 of them. I'm quite a ways into the 9-11 year old entries and have found them imaginative and well written - our teachers are teaching some good language arts! A lot of fun to read, actually. I have a March 5th deadline.

I've also spent my lunch hours at work and some evenings polishing up my latest manuscript in preparation for its presentation to the Dundurn editorial team. I'm half-way through and hope to have it completed by the end of next week.

So you pretty much know how I'm spending my free time.

I've gotten questions lately about Ted's next project - many remember the summer of the front deck, a project that unfolded in the fulness of time (quite a full bit of time . . . ). Well, Ted's been painting one of the bedrooms since early fall 2011 and I hear it will soon be time to purchase the paint.  Here is a shot of the room in its original violet colour. He dismantled the loft last week to make painting easier. You can see the two beams at the ceiling where the loft boards go - we had it built for the girls when they were younger. I'll update the progress as we go along :-) 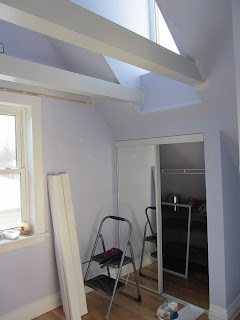 But this project is just a teaser. Ted has plans to build a deck in our back yard this summer. This is the project he had on the table last summer so I'm hopeful the year of thinking about it will bring some tangible results. His progress ought to keep my blog interesting once it begins.

Okay. Just one more photo. (I'm hoping he forgets to read my blog this week :-) 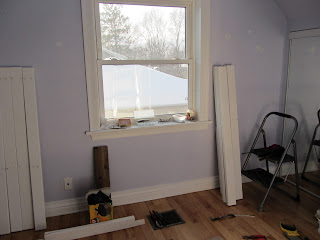 Posted by 7 Criminal Minds at Saturday, February 25, 2012 No comments:

Puttering Away My Saturday

This Saturday has drifted by without a plan. I got up early and worked on a manuscript, worked out, went shopping, wrote some more and watched the opening game of the Scotties (curling for those who do not know), made supper, ate supper, and now, I'm back to do some more writing. Oh yes, and I played around with my new Canon camera - a pocket camera but it takes video - I'm determined to become proficient. I lost the instructions to my last camera and never did learn how to operate it beyond the basic point and shoot. I can't tell you how annoying that double flash was, but I had no idea what button to push to get rid of it. Anyhow, here is my first photo of my office reading space. All the debris from opening my new camera is strewn about. 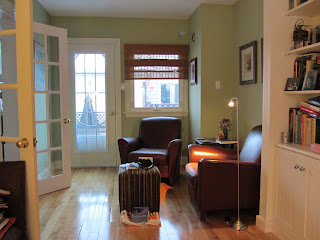 I attended Peggy Blair's book launch for her first mystery The Beggar's Opera on Thursday night. She held it in Orange art gallery near the Parkdale Market. Her book is set in Cuba and the theme for the evening was Latin - music, food, artwork . . . it was a great event. Peggy tells the story of meeting Ian Rankin in a bar in Great Britain and asking to have a photo taken with him. She'd gone over for the Debut Dagger awards, being shortlisted but not winning, and she was on her way back to Ottawa. Anyhow, she and Ian got to chatting and he said to call his agent and mention he'd recommended her. The rest, as they say, is history. A two book deal with Penguin and notable reviews. For authors, the scenario is like winning the lottory.

Sad news today for Capital Crime Writers. Trevor Hodge, one of our long-time members, died in his sleep at the age of 82. He was a member of the group when I joined and regularly attended meetings and events. He was always smiling and friendly and entertained us with readings from his work at the annual pub night. I found out today that he used to be a professor at Carleton U. and taught the Classics. We will certainly miss him at our meetings - it's hard to imagine him not there.

Well, I'd best get back to my writing before the next curling game comes on tv. It's amazing how you can putter away a day. I've also started reading Peggy's book and find the premise fascinating - a cop who sees ghosts of murdered victims . . . .

Posted by 7 Criminal Minds at Saturday, February 18, 2012 No comments:

My ability to write went on hiatus for the week as the head cold moved in. It took all my energy to cough up both lungs on a daily and nightly basis, but recovery is in my sights and I'm back in the saddle. (Just how many cliches can one blog post hold?) (Quite a few, apparently.)

So, the good news first.  The acquisitions editor at Dundurn gave glowing feedback on my manuscript submission and will present it to the editorial board with a recommendation to publish. And music to a mystery author's ears - she didn't figure out the ending even though the clues are there :-) Her pitching of my book takes place in April so it will be a while before I get final word. She pointed out a few plot loose ends so I have to tidy up the manuscript a bit and resend, but this shouldn't take too long. I'm hoping they will see it as the first in a series - best not to get the cart ahead of the horse. (I know - enough with the cliches already.)

Patrick Walton took some rough footage of CBC Radio's Alan Neal reading from In Winter's Grip in October at the Capital Crime Writers' library day 'A Day to Kill' and made it into a little promo video.  This is a nice little souvenir of an exciting moment for me.  As Patrick's co-filmer said after the reading, "This is the voice I listen to on the radio every day on the drive home. Hard to believe he's standing up there reading from Brenda's book."

I have a little homework for Capital Crime Writers to do today. The president went on holiday and left me to do some promo of the upcoming Audrey Jessup short story contest. I've written a little blurb to send out and will do that later today or tomorrow. Let me just say that the deadline is April 2nd and 1st prize is $150. Word limit is 3500 words and the contest is open to anyone in the NCR (or a Capital Crime Writers member) aged 18+. This is your chance to kill someone off or commit a crime in words and get paid for it. Once you try it, you may never go back . . . .

Well, time for a second cup of coffee before I head out to the grocery store. I haven't bought food in two weeks and even the mice in the cupboards are starting to grumble. One cannot live on takeout forever although we've been giving it our best shot - although Ted did make a trip to M & M's last weekend so we've sort of cooked stuff. However, it might be time to eat something green or yellow that doesn't come in a package.
Posted by 7 Criminal Minds at Saturday, February 11, 2012 No comments:

Home With My Feet Up

Did you hear that? It's me dropping like one of the flies - I've finally gotten one of the many bugs going around work. Sore throat, tired . . . time to stay home and recover. I'm sure most of you know the feeling.

It's actually been a rather uneventful week. I finished all my homework for the acquisitions editor at Dundurn to pitch my adult mystery. I've plugged away at the Rapid Reads sequel and am now at the point where I think it is terrible - this happens with every manuscript. I'll finish it though and then have some readers critique it. At the very least, I've had fun writing it.

So here is an embarrassing moment to share since I haven't much to talk about this week. I was coming home on the bus on Thursday after work, not feeling so great but hanging in. A group of school kids got on at Wellington Street and were clogging up the aisle since all the seats were full. I rang the bell for my stop and stood up, moving toward the side door. The bus driver hit the brakes and I fell flat on my bottom on one of the stairs between the upper and lower level - there were a lot of gasps and then shocked silence. I managed to get up and with all the dignity I could muster, stepped off the bus as if nothing had happened. Hard to do when one's white coat is dripping mud. Luckily, no harm done otherwise.

So, a day of drinking tea and resting up ahead. I'm reading an Elizabeth George book Careless in Red  and recommend her series for those who've never read her Inspector Lynleys. This is the first day that I said to Ted I'm thinking about getting a Kobo or similar device to be able to download books. It might be nice to have the option although I still prefer the tactile experience of a real book and know that I always will. I'm sure those people driving Edsels talked the same way. Heck, I'm still driving my old Pontiac . . . .
Posted by 7 Criminal Minds at Saturday, February 04, 2012 No comments: