I took the train to Toronto on Sunday and was met by my daughter Julia and Dawn, my good friend from university days. We visited a pub in St. Lawrence Market (Julia taking a photo of me taking a photo of her - she had just had her hair cut off that morning to donate to cancer patients so shout out to ma belle fille)... 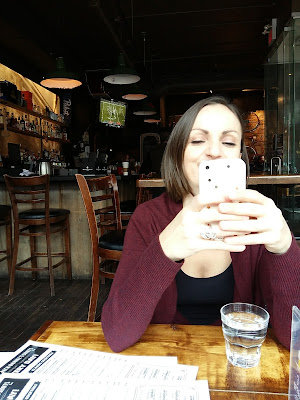 ...before continuing on to El Catrin, a Mexican restaurant in the Distillery District, which I highly recommend - I see it was also voted best 'first date' restaurant for those of you in the market - some terrific tapas dishes and sangria. All in all, a great way to celebrate my birthday! 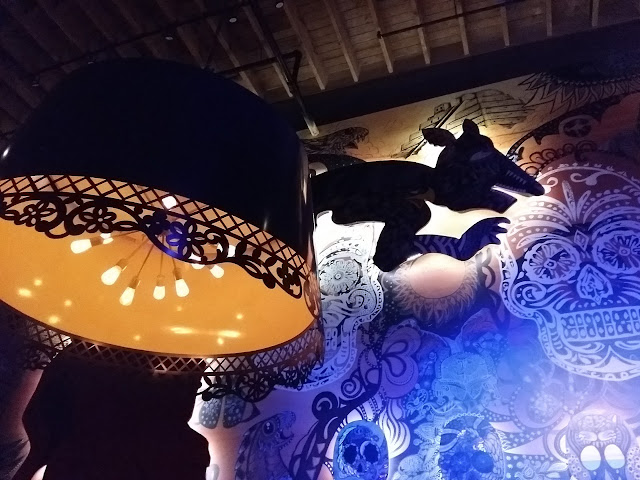 Monday morning, Dawn and I made our way to the recording studio on Dufferin to listen in on a taping of Butterfly Kills. Michelle Melski, my Dundurn publicist, met us there, and took us for lunch after the taping at the Drake and then on to the Eaton Centre by street car where I signed copies of my books that they had on hand in Indigo Chapters. Michelle also gave me an advance reading copy of Shallow End, which will be out in March - gratifying to hold the book for the first time.

For the book taping, Michelle St John is the voice actress for the books and Dan Harden is the recording engineer. Michelle had been ill with a cold the week before and was still suffering some of its effects, but her voice was clear and rich. Dan kept her from getting overtired and we stopped early for the day so that she could rest her voice for the next day's session. She sat in the makeshift studio in the next room where she read the book from an iPad and we were in the sound room watching Dan work the controls. Much like an actual audio book, we couldn't see Michelle but heard her voice loud and clear through the sound system. She does a terrific job and half the time I couldn't believe I'd written the words she was reading. She brought the pages and characters to life. I could see that Dan is very experienced at his work and knows how to get the best out of a reader. We learned that he was recently in a rock band named Malibu Knights (give a listen)  out West that once opened for Bon Jovi and works with a lot of musicians in his studio. Dan was the lead singer - great voice! 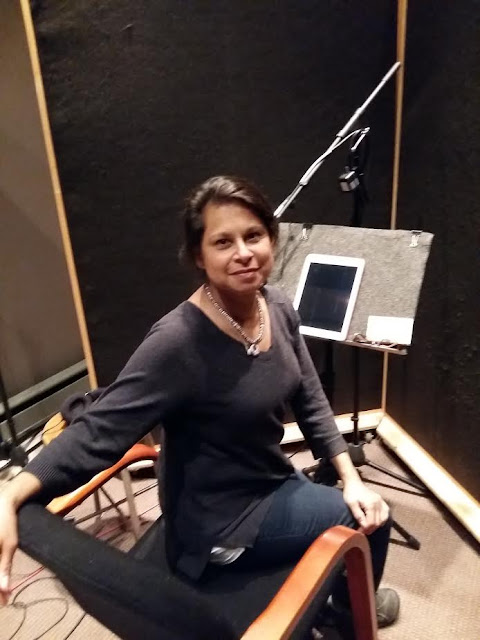 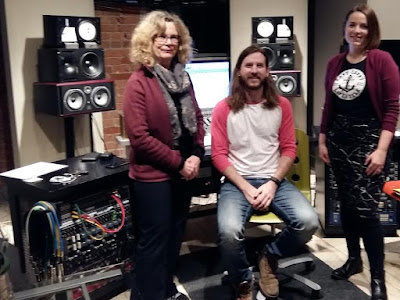 Top photo is Michelle St John and the bottom photo is me with Dan and Michelle Meleski. 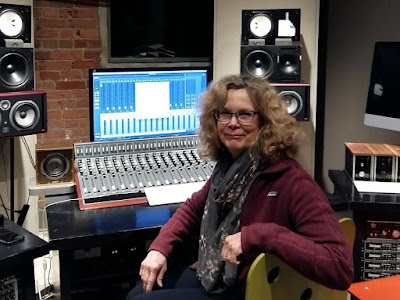 Pretending I know what's going on.

So back to reality. I finished draft one of this latest manuscript (book five in the Stonechild series) and have been going through it with that fine toothed comb, trying to catch all the errors and make the plot lines flow. I only got to chapter nine so have some ways to go. I've also been working on a presentation I'll be giving on writing a series for the Canadian Authors Association on Tuesday evening. November is starting out busy enough :-)

BTW - no snow in Toronto and still some flowers blooming. It was a wonderful few days for walking in the city!