A good week! I finished the first draft of the manuscript for my fifth Stonechild and Rouleau book and have been through the text once although in sections. I'm now starting on a complete reread, looking to tighten up the plot and clues. This is the first time that I changed the identity of a killer and only because it made more sense than the person I'd picked early on. This means I need to tinker with the details.

I had fun at the Chapters Gloucester book signing last Saturday, having a chance to chat with some interesting people while selling out of the copies of Cold Mourning that the store had on hand. Ottawa mystery authors have a terrific supporter named Nancy Reid who keeps lists of our books and buys all the new releases. She came out to say hi and took my photo. You can see me next to the Christmas candles and little fake trees, which made me think I should get started on some gift shopping. Only eight weeks away.... 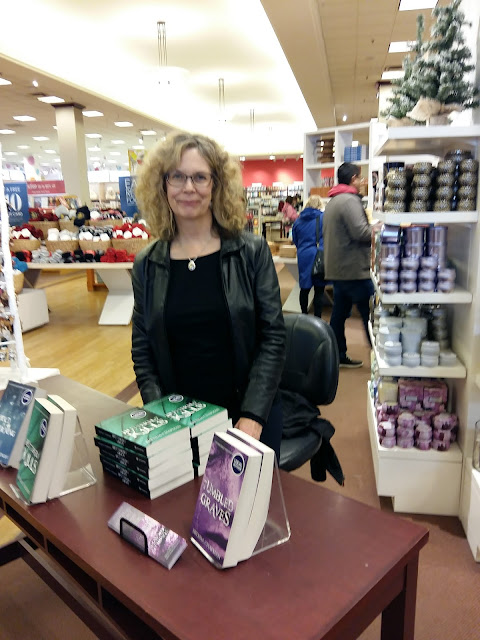 So this week, I'm off to Toronto to meet my publicist Michelle and to sit in on a taping of the audio tape for Butterfly Kills. I'll be meeting the actress (also named Michelle) and having a chance to chat with her about the books. Turns out that Sleuth of Baker Street bookshop is closed on Mondays so we might visit an Indigo store in the afternoon. I'll have a recap and hopefully some photos for next week's post.

My other current preoccupation is organizing my thoughts for a talk about writing a series, which I'll be giving to the Canadian Authors Association a week Tuesday. I'm also visiting the Sunnyside Library Book Club in November and I understand they're catching up on reading the series. I enjoy hearing feedback from readers about the characters and story lines and look forward to both events.

How can this be the end of October already? We had snow on the ground yesterday for the entire day but the lawns are green again this morning with a rainy day ahead. I just want to crawl back into bed and let this day take care of itself, but it's time to have one last cup of coffee and head out to the grocery store in my new used car. I bought a 2005 Honda Civic Accord with amazingly low mileage that drives like a dream. Might be time to get the winter tires on.
Posted by 7 Criminal Minds at Saturday, October 29, 2016