Well, I've made it through the first round of editing for my latest manuscript (Stonechild and Rouleau book five) and the story appears to be hanging together nicely. I'm setting the manuscript aside for a bit and then will give it one more careful read before sending it to Dundurn. I'm still toying around with a title, which has to be two words to go along with the other books in the series. Tougher than one might think.

I've also been going through the Shallow End advance reading copy and sent two changes in to the editor and have about eighty pages to read. I'm at the point with this one that I've lost all perspective and begin to doubt if I can even write well - this happens with every book. I was at Bouchercon in Baltimore some years back and Harlan Coben talked about going from thinking whatever book he was writing was genius to complete crap by the time he was two-thirds of the way through. Other authors report this happening to them as well so I'm thinking self-doubt is part of the creative process.

Speaking of Bouchercon, it will be taking place in Toronto next fall and is well worth attending if you're a crime fiction fan. I've been to two of them in Baltimore and Cleveland respectively and I think this will be only the second time that the conference will be in Canada. They usually have about 1,500 people attending and attract some of the best-selling authors so you should check out the site if you're interested. The Sheraton Hotel has blocked off some rooms at a discounted price. 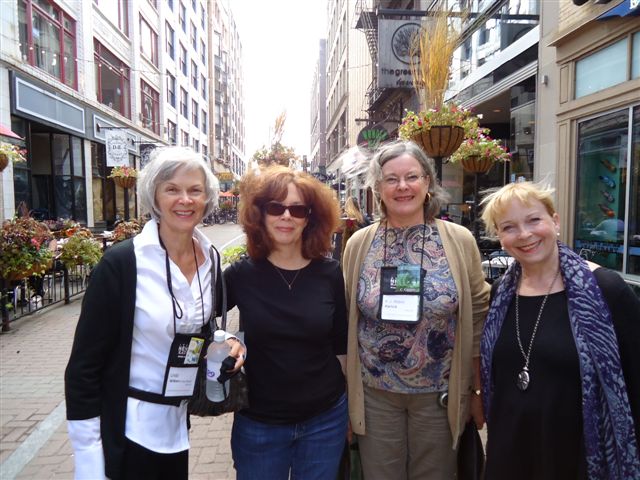 With Linda Wiken, R.J. Harlick and Mary Jane Maffini at Bouchercon in Cleveland 2012

I visited the Sunnyside Mystery Book Club yesterday afternoon at the Sunnyside Branch of the Ottawa Public Library. The room was full - about twenty of us sitting around a square grouping of tables - and over cups of tea, we chatted about the Stonechild series, my writing process and crime fiction. I had a lovely time and only realized I hadn't taken a photo to share as I was walking back to my car. Thank you to Mary Frances Taylor for inviting me and to everyone who came out and made the hour so enjoyable. Mystery readers are the best :-)

The mornings are fog-laden these days and our first big snow is on its way into the Ottawa Valley tomorrow. I'm off to buy food for the week before the weather turns, and will cook up a beef stew in red wine for tomorrow. Might even put on a fire and cozy up with a good book while the storm settles in.