The last day of August, but not the last day of heat. I'm getting awfully sick of my summer wardrobe I have to say. Ted says to get rid of my old clothes and go buy new . . . just one more reason to love this guy.

The article with my book choices came out in the Ottawa Citizen yesterday. Kind of nice that they posted my photo since it makes for good publicity. I had so many fall books that I wanted to choose, but was limited to just the two.

Writing has slowed a bit, but I'm nearing the end of the manuscript. I figure I might be able to wrap it up this three-day weekend. I'm at the point where the clues and ending have to work together. I was going great guns until I had to figure out how to reveal the killer. I'd plotted the storyline - who did the killing and why - but how does Anna Sweet put everything together? It has to be plausible. Like a giant puzzle where you shouldn't ram the pieces into place if they don't fit. Luckily for me, I have a wonderful editor Pam Robertson at Grass Roots Press who is adept at pointing out plot weaknesses. She kind of rides shotgun. I might need her to fire off a few rounds.

Do you get that feeling in the pit of your stomach like I do every September? School is back in, fall activities are starting up, new television shows begin airing . . . feels like a fresh start. Exciting even. A fellow named Dave Scharf has used social media to capture the journey of his new enterprise called the Flying Banzini. This is a new restaurant, which happens to be in the same location as the now-closed Collected Works bookstore.

I rode the bus to work one day a few months back and saw the Flying Banzini sign go up. I did a Google search that evening. I found that Dave was blogging, tweeting and Facebooking about the steps involved in getting a restaurant off the ground. Every day, he posted a 'song of the day', showcasing some of the music he'll be playing in the restaurant. Brilliant really. Dave held three trial runs this week and invited people following him on social media to a free supper. Ted and I went on Thursday and met up with Katherine Hobbs and a few others. We had such a great evening - loved the food, wine and ambiance, not to mention the friendly atmosphere. Dave was a radio disc jockey in Saskatoon but moved here two years ago. He had trouble finding work in his field and so decided to take a stab at this dream he'd always had to open a restaurant. The grand opening is today! Katherine took the photo below - I'm holding up some of the signature mini-cheesecakes. 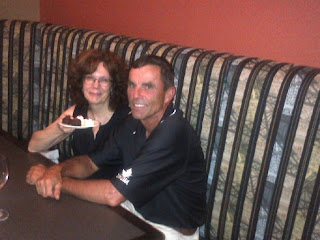 So, what I take from Dave's experience is that it's never too late to take a chance, follow your passion, make a fresh start. Let's all raise a glass to Dave, to September and to all of life's possibilities, large and small.
Posted by 7 Criminal Minds at Saturday, August 31, 2013