The Power of Words

The printer has delivered My Sister's Keeper and The Hard Fall to the publisher and my copies are being mailed to me on Tuesday.They're now available for Kindle readers on Amazon, but my understanding is that hard copies of the books will need to be ordered from Grass Roots Press directly. I will be signing copies at Brittons in the Glebe from 1-3 p.m. on Saturday, October 5th. I'm also going to Toronto for a little launch at the Downsview Library on Tuesday, October 1st from 7-8 p.m. Rachelle, the librarian who is organizing the event, will be interviewing me and I'll do a short reading. There will be refreshments and books for sale.

I worked away at the third manuscript in this series and finished it up Wednesday evening. I wrote most of the long weekend and then evenings until nine or ten o'clock. I've submitted it to the publisher at Grass Roots Press and am waiting for feedback. This leaves me feeling at loose ends as I take a few days off and contemplate my next project. I'll be plotting the third in the Stonechild and Rouleau police procedural and getting a jump on that. I have one more Anna Sweet mystery contracted for the spring and will likely have to switch over to that one at some point since the Dundurn books take a year to write. If your head is spinning, mine is going like a top.

I was invited to the Power of Words breakfast yesterday - an event organized by People, Words and Change, which is an adult literacy, one-on-one tutorial service. The keynote speaker this year was Senator Don Meredith, who spoke with passion about overcoming challenges and going for your dream. He's been working with youth to keep them in school. 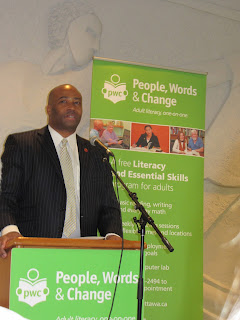 When I attend events such as this and hear the stories of adult learners, I'm even more satisfied to be writing books for this audience. One woman spoke of immigrating from the Sudan where she was studying business. Without being able to speak English, she became a full-time cleaner. Now, she's learning to read and write in English and cried when she said how her life is changing. Just one inspirational story among thousands.

Well, the weather changed from hot and muggy to downright cold the last few days. School's back in and curling clubs are back in action. I'm on two teams, starting in October. Throwing rocks at houses gives my life balance :-)

I passed by the Parkdale Market yesterday and saw the displays of fruits, vegetables and flowers. I'm going to head over there today to pick up some apples, fresh off the tree. This is the best time of year for eating . . . putting on an extra layer of fat for those cold mornings standing at the bus stop. The extra pounds also give some padding if you happen to slip on the ice. (Maybe, I'll pick up a pie while I'm out.)

And while I've been typing away at my desk, Ted's been in the backyard, working on the deck. He's got the roof covered in and has lots of lumber lying on the ground. I think all systems are on full steam ahead.
Posted by 7 Criminal Minds at Saturday, September 07, 2013