Keeping Out and About in April

My April 'book tour' is drawing to a close along with the month. Today, I'll be at Perfect Books (Elgin and Somerset) from 10:00 a.m. until noon as part of Authors for Indies Day. This is when authors visit independent bookstores to highlight what a terrific resource they are for our communities. If you are able, visit your independent bookstore and make a purchase - you may get to meet a local author or two!

Then, I'll be cutting across the city to Chapters Kanata from 1:00 until 3:00 p.m. to sign more copies of Shallow End and the rest of the Stonechild and Rouleau series. I hope you can come by at one location or the other to say hello.

Last Saturday's visit to Coles Carlingwood was a relaxing and rather fun afternoon. I met lots of customers and was gratified when three different strangers each came up over the course of the afternoon to say hello and to tell me that they'd read all four in the Stonechild series and were waiting for the next. Another happy moment was when a woman stopped as she left the store with her book purchases. She said that she wished she'd seen me before she paid as she would have liked to buy mine instead. Some fifteen minutes later, she came back to the store, scooped up a copy of each of my books, returned the ones she'd bought, and replaced them with mine :-) Here's a photo of my friend Maureen Johnston who stopped by for the latest book. 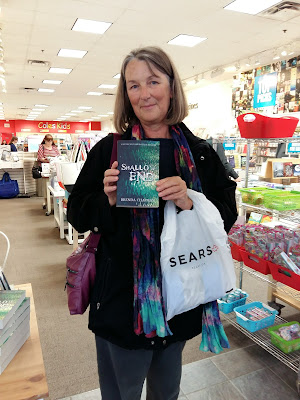 I visited the Russell Library Monday evening and talked writing and the Stonechild series with about twenty-five mystery fans. They were an attentive audience with lots of good questions to make the evening fly by. I read from the first Anna Sweet novella, My Sister's Keeper,  and later from Shallow End to give an idea of the different writing styles and levels.

Ted tells me that we were in Russell once for a curling bonspiel, but I can't say that I remember. It's a growing town of about 3000 people with subdivisions of new homes as well as the older residences. The public library is new as are other buildings like the high school. About forty minutes from the west end in the middle of farm country, it's a lovely little community.

I've been juggling different writing projects. I've been judging a short story contest along with two crime fictions writers, Madona Skaff and Melissa Yuan-Innes and we've had a lot of back and forth. All the work finished up on Friday with the winners being announced at an Ottawa International Writers Festival event with Louise Penny on June 16.  The upcoming Anna Sweet manuscript (Missing Her) also came back for a final read-through as well as five cover designs. The publisher and I weren't blown away by any of the concepts so we've been brainstorming and think we may have lighted on something. I'll share when it's ready. And, I've gotten word that the process is starting for the next Stonechild book and I have to review my author grid for Bleeding Darkness - this is an excel spread sheet of contacts and marketing information. I'll have to get my head around it tomorrow.

I also finished a science section of main idea paragraphs for the workbooks and hit 25,000 words on my latest manuscript. I feel like I'm starting to get ahead of the eight ball.

At last, some decent spring weather to lift the spirits. A thunder storm rumbled across the city overnight so you know the cold and warm air are up there duking it out, but my money is on the heat coming out on top for a few months anyhow. It'll settle in long enough for drinks on the verandah, barbecues, evenings on the back deck and long bike rides... summer can't make it into the Ottawa Valley fast enough for me.