The new cover arrived this week from Dundurn! Looks like a keeper. The novel is set just before Christmas in Ottawa so a frosty time in the nation's capital that's been well captured. Cold Mourning is due for release March 1, 2014: 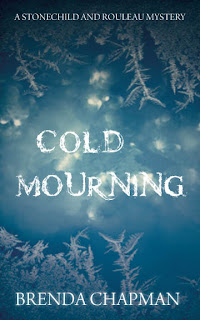 I've been plugging away on its sequel and am rounding the corner to the ending, now at 71,000 words and aiming for the vicinity of 80,000 words. I had trouble sleeping on Thursday night, working out the plot details in my mind, mainly because the story took a turn that I didn't see coming. Once I finish this draft, I'm going to set it aside for a bit while I work on the sequel to My Sister's Keeper for Grass Roots Press. Looks like I have my work cut out for me through the summer!

I had a great time at the Awesome Authors awards evening where I announced the English short story winners and honourable mentions on Tuesday evening. The auditorium at Ben Franklin Place in Centrepointe was packed to the rafters with people standing and sitting on the floor. There were lots of excited kids and their families reflecting the record number of poetry and short story entries in both English and French. I read over 250 entries, which was about 100 more than last year. Shout out to Jessica Roy from the Ottawa Public Library who organized the contest and MC'd the ceremony. She sent me a couple of photos taken by their official photographer. 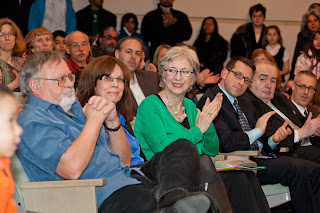 I'm sitting between fellow judges Michel Lavoie and J.C. Sulzenko. To JC's left is OPL Board Trustee André Bergeron, Board Trustee, Jim Bennett and City Councillor Keith Egli, who helped with handing out the prizes. 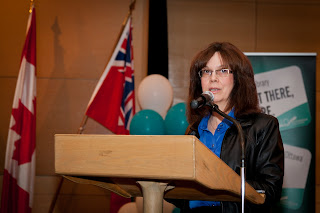 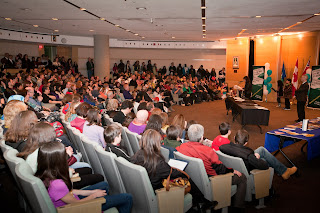 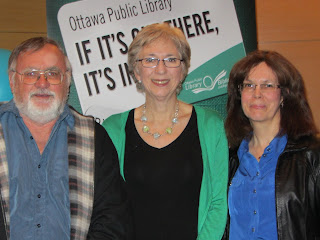 Michel Lavoie, JC Sulzenko et moi after the ceremony.
I'm most happy to have four days off this weekend to work on my manuscript and am making good use of the time. Today, however, I have an Easter dinner for eight to prepare and will be heading out to the shops after another cup of coffee. Ted is going to spearhead the cooking of a ham on the BBQ, something we've never attempted. The biggest challenge will be digging out the BBQ from the pile of snow in the backyard.

I hope you also have a wonderful weekend and the bunny hops by with some chocolate eggs.
Posted by 7 Criminal Minds at Saturday, March 30, 2013