So, Team Homan won the national Scotties Tournament of Hearts last Sunday in Kingston! What a stunning performance against Jennifer Jones, a very worthy opponent. Both teams put on a show of curling ability and superior strategy, but the Homan team came out on top. To crown off the night, my daughter Lisa won the most valuable player trophy from TSN. 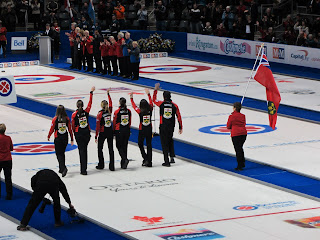 Team Homan walking up the ice to receive their Scotties trophy after winning the final game. 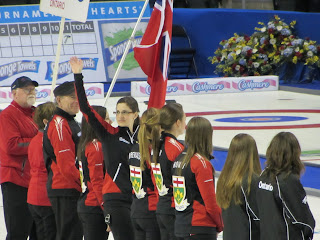 ﻿
A wave to the crowd from my daughter Lisa.
﻿ 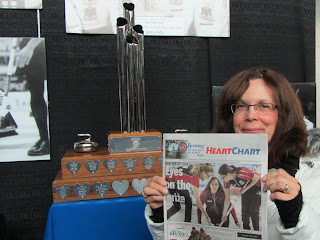 I was bringing good karma with the Scotties trophy earlier in the week. 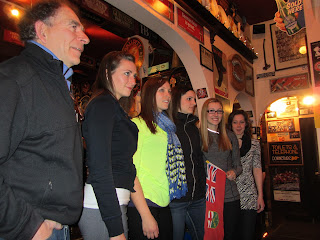 The team: Coach Earl Morris, Emma Miskew, Rachel Homan, Lisa Weagle, Alison Kreviazuk and Stephanie LeDrew
I see a parallel between this team's success and writing . . . both take a lot of work, practice and dedication without any assurance of the final outcome. The leap of faith that success will arrive some day and the willingness to accept rejection or defeat along the way are intrinsic to both sport and writing. Without this struggle though, the victories wouldn't be as sweet or as valuable.
Well, I read through all 200 of the electronic entries to the Awesome Authors contest and another package of hard copy entries arrived by post yesterday. There look to be about 50 more, which I plan to have read by the end of the weekend. Then, time to determine order of finish from my shortlists.
I'll also be back working on my manuscript. Allister Thompson, senior editor at Dundurn, gave this story its first pitch to the editorial board and feedback is good. I'm most eager to get back at it . . . the finish is on the horizon and so much fun to write.
I also discovered that Cold Mourning is up on Amazon already although not due out until March 2014 - no cover yet, but the synopsis is posted. You can even pre-order!
Lots going on as we turn the corner into warmer temperatures and melting snow. So much to be thankful for and so much to celebrate.
Go Team Canada!
﻿
﻿
﻿
Posted by 7 Criminal Minds at Saturday, March 02, 2013