We spent an exciting week in St. Catharines at the Scotties - our national ladies' curling competition - and witnessed a terrific final between Ontario (Rachel Homan) and Manitoba (Michelle Englot) with Ontario winning in an extra end. Of course, the Ontario team has our daughter Lisa at lead so a very happy result! They'll represent Canada at Worlds in Beijing China, which begin March 18, although we'll be cheering them on from home. 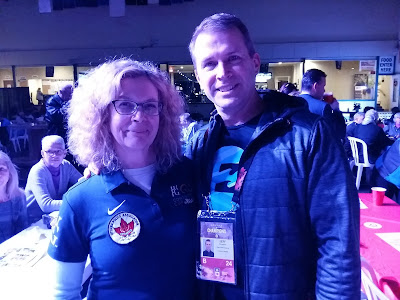 No tournament is complete without a photo with curling champion Jeff Stoughton :-)

I've been working hard on writing tasks this week, beginning with going through the edits from my Grass Roots editor Pam on the sixth Anna Sweet manuscript. The edits weren't that numerous and mainly concerned plot timing and logic questions. This editing round took me a few days and I now await Pam's feedback. I also signed a contract to work on four workbooks for adult learners, which involves researching thirty-five topics and writing paragraphs based on each topic that have a main idea and supporting details. I've written one paragraph and am currently researching a second topic. I'll submit both next week to see if I'm on the right track. The grade level is four/five. This project will keep me busy for a few months at least.

I also had great news from my Dundurn publicist early this week - Publishers Weekly gave Shallow End a starred review! The review calls the book 'intriguing' and 'a gripping read'. I've been sending out more evites to the launch which will be April 7. Here is the invitation if you are in Ottawa and can plan to attend. 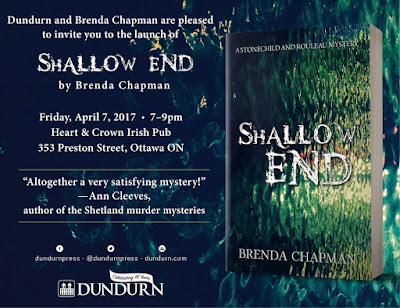 I'll be doing a few book signings as well in April, including a trip to Toronto and Sleuth of Baker Street on Saturday, April 15 between 3:00 and 5:00 p.m.

So, busy weeks ahead as we round into spring. I hope to meet lots of friends and readers along the way.