Monday was a very good feedback day. I received the first advance review for Cold Mourning, which Dundurn plans to release March 1, 2014, and it was very postitive. I always like reading the word 'gripping' in relation to my stories :-)

And, Pat Campbell, Grass Roots Press publisher, gave a big thumbs up to the third Anna Sweet mystery, saying that I've 'raised my own bar'. I got another 'gripping' for this one too. Pam, the editor, sent me a note calling the manuscript 'wonderful'.

Okay, okay. A little horn-blowing, but really, all for the books. If they aren't well received, then four months or a year of work is really for nought. I always prepare myself for the worst and celebrate any successes. Then, I tuck all comments away and carry on writing. The negative comments aren't all bad either because when valid, they help to improve my writing.

So, I've taken the week off to recharge before tackling the third in the Stonechild and Rouleau series. Although maybe not completely off - I've got a crime and character list worked out and am preparing to write the opening chapter. I feel better once I have a solid opening under my belt. It was interesting to hear thriller-writer Linwood Barclay say that he always worries that his last book will be the last good idea he ever has.

The secret is out: writers are a neurotic bunch . . . but then, isn't everybody?

The back deck is starting to take shape. Ted has done a ton of prep work to make this puppy solid and square although purchasing the laser level might have been a bad thing for a guy who is already a perfectionist. But I digress. Here is the latest pic, taken a few minutes ago: 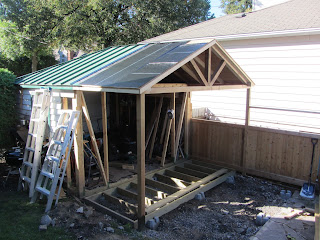 I love watching Ted's projects take shape. Before I met him, I had no opinion on drywall or weeping tile. I had no idea the word 'stud' had a second meaning.

Well, today, our street is blocking of the road and we're having a party. We all cart our lawn chairs half-way down and haul out the barbecues. Everyone brings food and drink, the kids chalk up the street and race up and down, music plays and we have one last neighbourhood fling before settling into our homes for the colder weather ahead. Of course, September could still pump out some hot days - no need to give up hope yet.

One last note. I received an e-mail comment from a fellow in Kermit, Texas, the location of my opening scene in My Sister's Keeper. Hello to Kermit - you are now officially on Canada's friend list!