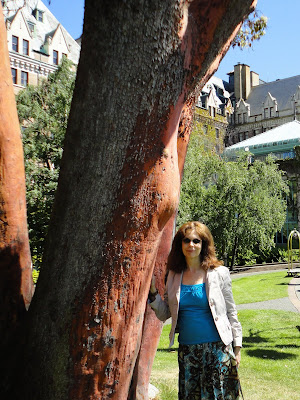 Just back from five days in Vancouver and Victoria where I attended the Bloody Words Mystery Writers Conference. I went with good friends Darlene Cole and Katherine Hobbs and we had a blast - if laughter is good for the soul, then ours are in pretty good shape.

I'd never been to the West Coast before and the forecast was five days of rain. In one of those lucky twists of the universe, we had five days of sun with only one morning of rain in Vancouver. Someone up there was doing their best to make us fall in love with the Pacific Coast - and they did an admirable job.

We landed in downtown Vancouver in time for the first game of the Stanley Cup playoffs between Vancouver and Boston. You could feel the excitement. Every bar was packed with fans who erupted with eighteen seconds to go when the Canucks scored the only goal of the game. We spent the evening and following morning walking, taking in as much of the downtown as possible, and talking hockey to everyone we met, including cab drivers and waiters, before catching the ferry to Victoria.

The conference was held at the Hotel Grand Pacific in Victoria, right on the Inner Harbour - just beautiful. See my photo below of the harbour at night. The above photo was taken in the grounds of the Empress Hotel - I'm standing next to an arbutus tree. Conferences are a chance to network, meet fans and talk books. They are also an opportunity to sightsee, shop, eat and socialize.

I was part of the "read dating" hour Saturday morning - three authors making three-minute pitches to a table of readers before moving on to the next table. It was fun but repetitive for the three authors. I was lucky to be teamed with authors Robin Spano and Mike Lawson, both of whom made me want to read their books, which I'll be picking up when I get the chance. Then, I signed free copies of The Second Wife in the book room and met some lovely people. One woman from B.C. told me she was a teacher and her kids enjoyed all four of my Jennifer Bannon mysteries - music to my ears! My second conference event was a panel on creating characters before your eyes. People in the audience gave us a few characteristics and a genre (cosy, noir, P.I. etc.) and we had to create characters - it was a fun but somewhat difficult exercise. Phyllis Smallman moderated and Rick Bletcha and I managed to poke a little fun at each other - all for the audience's enjoyment.

There were also a Friday night reception and a Saturday night banquet, standard activities at writing conferenences. So, work and fun all wrapped up in three hectic days. The best spin off is that I've come home rejuvenated and raring to get back at my typewriter.