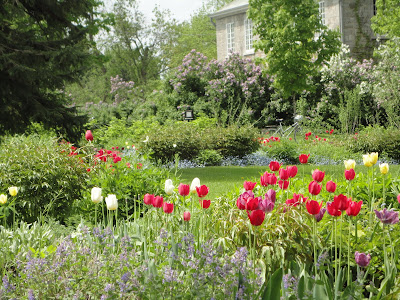 Ottawa is blessed with a lot of green space, bicycle paths and gardens such as this one, named Maplelawn. The origianl house has been converted into a restaurant, and the walled garden has been lovingly restored by a host of volunteers and is open to the public. I like to bike there and wander the paths and sit on one of the benches to breathe in calm of this beautiful oasis in the middle of the city.

Just up the road from the garden is the Unitarian Church, where I spent last evening as a guest of their monthly arts night, which happens the last Friday of the month. The room was set up like a cafe with candles lit began with two poems and a piano performance from the audience. Then three of us presented - I represented the writers, Valerie Cousins presented her nature-inspired oil paintings and Eric McKay gave a brilliant piano performance. The three of us than had a quick question and answer session with the audience while enjoying the baking donated by the organizers. It was a lovely evening and reinforced for me that creativity is ultimately about joy and passion and something to be celebrated.

This coming week, I fly to Vancouver for two days before taking the ferry to Victoria Island for Bloody Words mystery conference. I'm going with my good friends Darlene Cole and Katherine Hobbs and am looking forward to the time together. I've only been as far west as Jasper and this will be my first look at the Pacific Ocean. I'll have to compare its seafood to that of the Atlantic - it's going to take some mighty fine flavour to outdo Maritime clams and scallops.

Well, all this cold rain and gloom are starting to wear on the spirits. I've had a headache for a few days and wonder if it could be linked to the pressure system that has stubbornly entrenched itself over our city. It is race weekend in the Capital beginning today however, and this isn't bad weather for runners - the rain is supposed to be intermittant and heat won't be coming our way until Tuesday. I see sunscreen and barbecues on the horizon.
Posted by 7 Criminal Minds at Saturday, May 28, 2011