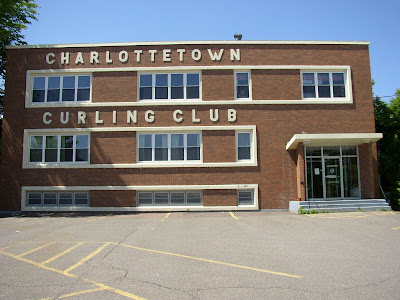 In summer 2004, Ted, Julia and I visited PEI for the first time and searched out the Charlottetown Curling Club, the home of Suzanne Gaudet, a star curler just out of juniors who'd done well at the Scotties. I rmember that the door was unlocked and we went inside to wander around the empty club. We never imagined that we'd be back to Charlottetown to watch one of our daughters representing Ontario in the Scotties, but that is just what is about to happen - Lisa is preparing with the rest of the Rachel Homan rink to fly to Charlottetown at the end of this week to compete against the top ladies' teams in the country. You can cheer them on by watching the games on TSN all week.

My writing this week has been on hold, but that doesn't mean that lots hasn't been going on publicity-wise. My revamped website launched last week and I've already managed to update the news section with a couple of items - an interview on Open Book Toronto and a podcast for PBS that has appeared on YouTube. I made this last interview while at the Magna Cum Murder mystery conference in Muncie Indiana in the fall. I was also interviewed at work for the national Department of Justice magazine, which I believe comes out in April, and had another interview by phone with the Chronicle-Journal in Thunder Bay on Thursday. The article is scheduled to come out early next week. The Chronicle-Journal is also reviewing In Winter's Grip and that will be out in another issue.

Once again, this year, I'm the short story judge for the Ottawa Public Library's Awesome Authors contest for 12-17 year olds. The package of stories arrived by courrier on Wednesday - this year, 150 stories for me to go through. I'm looking forward to some good reading in the next few weeks. I'll be handing out the awards at a ceremony at Ben Franklin place mid-March along with the other two judges.

Other events are lining up for the spring. Barb Fradkin, Jeff Ross and I are planning a joint book launch in May at a pub - my kind of launch - we all have books being released by Orca so decided to hold one big party. More on this soon. Chris Forrest and have also been approached by the downtown library to present our latest books one evening in April. We're planning a fun evening of readings and chat. Again, details will follow.

Well, this afternoon, I'm meeting a new friend for coffee - Tim Wynne-Jones, one of our top writers for kids and young adults. Tim is going to read my manuscript Second Chances with a view to giving a cover blurb. I'm thrilled that he is reading my work. My editor Allister and I made a quick first edit of the manuscript last week so that we'd have a somewhat decent copy for Tim to read. I think if you were a teenager in the 70s, you'll enjoy the story. It was nostalgic doing the research, that's for sure. All the old music is on YouTube . . . a little Smoke on the Water anyone?
Posted by 7 Criminal Minds at Saturday, February 12, 2011