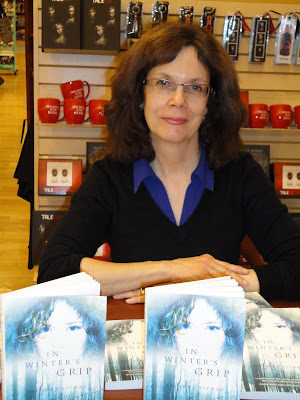 In Winter's Grip is now in stores across the country and the U.S. Unbelievable really when I stop to think about it. I've been getting some very postitive reviewing from those who've read the book, including an unexpected note from Tim Wynne-Jones - award winning children's author - saying he was at the launch and really enjoyed the suspense and story. Good to get such good feedback from another author, especially one as well respected as Tim.

I spent the week curling - five games since last I blogged. Yesterday, I curled in the morning and then drove out to Beaverbrook branch of the Ottawa Public Library to teach kids a short story-writing workshop. This is part of the Awesome Authors contest - all of the judges teach a workshop before the entries are due. I've agreed to judge the English short stories again this year and expect to spend several hours reading stories in the new year. Thirteen kids attended the workshop and they were just a great group - enthusiastic, engaged and filled with good questions. After a fun hour, I rushed back to Westboro to curl in the B-side final, and am happy to report victory.

I also spent part of last week looking up lyrics and notable quotes from 1970 and 1971 for my YA manuscript set in the Vietnam era - 1971 to be exact. I decided to add a quote to the beginning of each chapter, so that meant rereading each chapter, coming up with a theme or link to a quote. I'm thinking I got some spot on, but will wait to see what my editor thinks. Anyhow, I feel a big lifting of weight with the final submission of this manuscript to Napoleon. It was called "After Annie" but the title has now changed to Second Chances. I rewrote the ending and think the story a lot tighter. On va voir.

I also heard from Orca that they will entertain the idea of a sequel to follow The Second Wife. I'm going to take a little breather to get Christmas together before tackling an outline. Give the ideas time to ferment, like good wine.

So now the season of parties, dinners, shopping and decorating begins. I've ventured out to neighbourhood stores and started the annual gift-buying dance. I imagine you are all involved in the same tango. It's an annual ritual that unites us one and all.
May the sales be with you.
Posted by 7 Criminal Minds at Sunday, November 28, 2010