I am thankful for one thing, however. This record, never-ending rain is not snow. We'd have broken our snowblowers and thrown out our backs by now.

The writing is coming along. I think I've worked out most of the last third of the book (which I've yet to write) and some of the dangling story lines appear to be coming together. I know I'm not the only author who wonders if the magic will happen and the chaos will become coherent. I'm almost at 54,000 words now and the action is beginning to pick up. I'm mulling over killing off two characters and not sure if both, one or none will survive. Pretty sure about one's fate but not the other. Hard to bump a character off when you've grown fond of them ... but needs must.

Tuesday morning, Judith Van Berkom from Kitchissippi Times stopped by to interview me about my summer read picks. We took cups of tea into the backyard and discussed books, and after the interview, flowers and gardening. The article will be in the August issue so those in the neighborhood will soon know my choices :-) 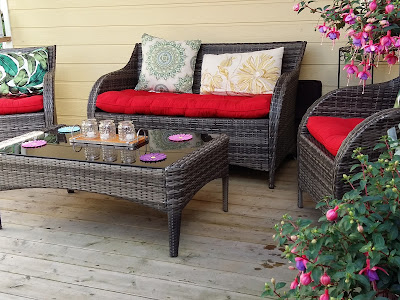 I received an email yesterday from a Dundurn editor letting me know that we'll be editing Bleeding Darkness the first two weeks of August. The editor will be going through the manuscript first and sending their proposed changes to me. I'm not sure who the editor will be on this book. My writing will pretty much go on hold once the editing starts so I'll try to pick up my pace now. I submitted the health unit main idea paragraphs for the adult literacy workbooks to Grass Roots Press last week and am starting the last unit on people. First up is Sir Ernest Shackleton, Antarctic explorer who led quite the exciting life. I've done the research and will now get writing. There are six paragraphs left to complete.

Back to the Canadian preoccupation - the weather - after a night of steady rain, the sun is trying to break through the cloud cover and a rainless day is predicted. Looks like a busy day ahead with some writing and reading in my plans but also some time outside. It would be a crime not to enjoy the pockets of good weather when we get them.