I've plugged away at my latest manuscript this week, reaching 63,000 words. I was aiming for 64,000 but am not unhappy with my pace. At this rate, I should have the first draft finished by end of October. Lots of leeway as it is due to the publisher in February. I'm at the point where I have to connect the subplots and head toward solving the crime(s) so I'm heading into the trickiest bit.

I went to the People, Words and Change annual breakfast, which was held on Literacy Day. The breakfast celebrates adult learners and the volunteer tutors and is made possible by many generous donations from the community, including the meal, which is provided by Moe Nesrallah every year. Terry Marcotte, Sports Director at CTV Ottawa, was emcee with learners speaking about their lives and what led them to People, Words and Change. Former NDP MP Paul Dewer was the guest speaker and he talked about the importance of funding literacy in Canada and internationally. You can see some of the crowd listening to People, Words and Change Director Dee Sullivan, who does a phenomenal job along with her small team, matching learners with tutors and facilitating real change in their lives. 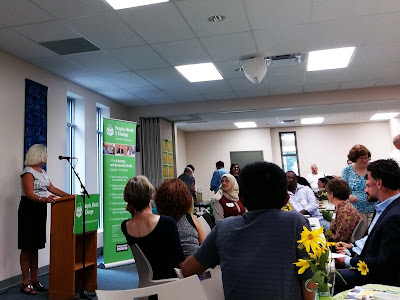 This week, I'll be visiting a book club in Manotick along with Mary Jane Maffini. We've been asked to speak about our writing life and books over glasses of wine and snacks. Not a bad gig:-)

So, school is back in and summer is slipping into autumn although we're having a final day in a long stretch of heat and humidity. I've been to the curling sign up, held on Wednesday evening, and am on two teams this season. Both of my daughters are on competitive teams, making our winters exciting as we follow along their games online or on television.

The summer lull is almost over....lots to look forward to just around the corner.
Posted by 7 Criminal Minds at Saturday, September 10, 2016