Yesterday was the 50th anniversary of John F. Kennedy's assassination. I can recall the moment when a teacher went from class to class with the news that the President had been shot. I had just turned eight and had no knowledge of Kennedy, but I remember this as one of the darkest, saddest days of my young life. I have a vague recollection of later watching the events unfold later on our black and white television. The entire day and week are shadowy and depressing in my memory even still. The rain and grayness of yesterday seemed fitting to mark this day.

I found this week's coverage interesting in that the reporters tracked down many of the people who were in Dallas at Daly Plaza that day. Their first-hand accounts are as vivid for them as the moment the shooting happened. This video is unbelievable if you haven't seen it before.

And my week -- I worked on a scene of about 2000 words last weekend and off and on in the evenings. It's a pivotal scene in the book and I wanted to get it right. I think that I am close. Since it involves an activity my husband knows more about than I, he has agreed to read it and give me technical advice to make it more realistic. Have I whetted your curiosity? Remember to ask me which scene when the book comes out :-)

I've also organized the book launch for Cold Mourning! Mark your calendars so that you are sure to attend if you are in the Ottawa area -- Sunday, March 9 from 2:00-4:00 p.m. at Whispers pub in Westboro. I launched my first books here and like that you can mingle, have a beer and some appetizers in a relaxed and friendly setting. Books on Beechwood is lined up to sell books at the event. I've also included references to Whispers in my Anna Sweet mysteries, and I brought the manager a copy of My Sister's Keeper yesterday as a keepsake. If you go the photos on the Whispers site, you'll see the outdoor patio where Anna Sweet meets her ex-partner.

The event at the adult high school with Alan Cumyn was on Tuesday morning and it was great. We had about a hundred adult learners and teachers in a large upstairs room. Alan and I each spoke for a few minutes and read from our books. Then, we took questions from the audience, and there was a lot of interest in our writing processes and the way that we capture an idea and turn it into a story. I found it interesting and a pleasure to listen to Alan, who has been in this business a long time with much success since he has so much talent and love for the written word.

So today I need to complete the discussion questions for The Hard Fall, which are due next week. The set for My Sister's Keeper were well received and are to be posted on the Grass Roots Press site soon for tutors to use with their students. I also want to get further along in my latest manuscript.

And Christmas shopping . . . I got out last weekend and will be out there again this weekend. Time is short with parties and get togethers starting to line up. Not to mention next week's Roar of the Rings in Winnipeg where our daughter Lisa's team plays in the Olympic trials. You can watch the games on TSN beginning next Sunday afternoon. 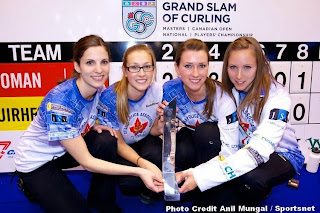 December promises to be a good, good month