Snowing out west and grey, damp days in Ottawa - winter feels just around the corner. I've done some housekeeping tasks this week, trying to clear the decks for a stint of writing. I'm at 7,000 words in the third Stonechild and Rouleau manuscript and trying to frame the next chapter before writing it. I'm stalled as I contemplate how to move the plot forward, but am happy with the lead up.

The first in the series, Cold Mourning, has received a positive reception from bloggers who read the advance reading copy. The latest review comes from a woman in England, who subsequently contacted me to do a Q and A on her blog. I'll post when that comes out.

The third Anna Sweet manuscript came back a second time from the editor with minor changes. Pam Robertson has a keen eye for making certain that all of the events and facts make sense, right down to which side of the street a car would be parked on. I think I need Pam to visit my house and make some sense of it too :-) Anyhow, I got those changes done and returned the manuscript to her for another look. The cover should be the next bit of excitement for this book, which is called To Keep a Secret.

November 19, Alan Cumyn and I will be speaking to adult learners at the adult high school downtown.

The Winnipeg trip nicely coincides with The Roar of the Rings when my daughter's curling team (Rachel Homan) will be playing for a chance to go to the Olympics in Sochi, Russia. Lisa was on a YouTube show this week called Ask Me Anything. You can still watch the show to find out how the team is preparing for such a major challenge.

And I know you're wondering how the back deck is coming along, so I just stepped outside in the pouring rain to give you the following update: Roof on and deck down. Notice the lovely cedar inside the metal roof. Still need to build the back wall before winter sets in. Fingers crossed that the snow out west isn't planning on moving this way. 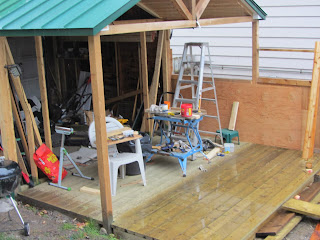 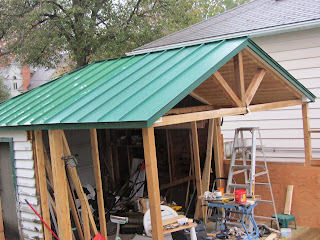