One of the things I enjoy about writing mysteries is the supportive community of Canadian authors. I've met many from across the country, mainly at Bloody Words, which is our national mystery author and fan convention - unusally held in June (although skipped this year). However, in 2014, Toronto will be host.

Tomorrow (Sunday), I'm going to Books on Beechwood where  Robin Spano and Dave Whellams will be launching their two latest mysteries beginning at one p.m. Both are published by ECW press out of Toronto.

I met Robin Spano at Bloody Words in Vancouver where we got paired up on a 'speed-selling' hour. Each table had four authors who each had two minutes to pitch their novel to readers before switching tables. While it might sound daunting, being teamed with Robin turned out to be great - she's fun and engaging.  Robin grew up in Toronto but lives in Lions Bay, B.C. and has a popular series going with lead character Clare Vengel, who is compared to "an older, less formulaic, slightly-slutty, grown-up Nancy Drew".  Sounds intriguing :-) We met up again last year at Bouchercon in Cleveland at the Rock and Roll Hall of Fame during a wine and cheese evening so it will be good to see her again.

Dave Whellams is an Ottawa author and lawyer, whom I met some years ago on my first stint working at the Department of Justice. Dave headed up the Criminal Law Policy section and I'd often have to get his sign off on files I was working on. He since retired from government and has a new career writing a mystery series set in England, although he tells me that he's never actually been. You wouldn't ever guess when you read his first book Walking into the Ocean. I'm looking forward to reading his second The Drowned Man (seeing a bit of a theme here). Dave joined Capital Crime Writers and our paths cross now and then - we gave a mystery author talk last year at Justice to some of our colleagues. 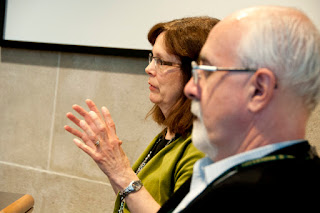 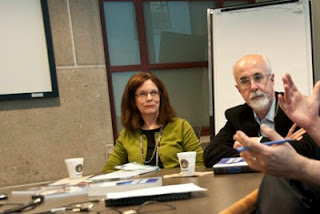 All are welcome to drop by Books on Beechwood tomorrow to meet two up and comers on the Canadian mystery scene!

I've had a good editing week on my latest manuscript and have started working on an opening to my next manuscript for Grass Roots Press.  I'll be back at them both later today and tomorrow.  So much to do . . . .

One last note, speaking of Canadian authors. I just finished reading Giles Blunt's latest John Cardinal Until the Night. I highly recommend this series if you like excellent writing and a bit of grit in your mysteries. Giles lived in New York for 20 years or so where he wrote for shows such as Law and Order and Street Legal. He lives in Toronto now and was our Capital Crime Writers' Christmas guest author a few winters ago. Also worth noting that Until the Night is shortlisted for an Arthur Ellis award this year as book of the year and not hard to see why.