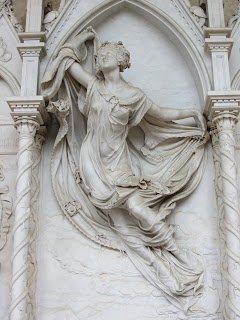 Florence:  Birthplace of the Renaissance (1401-1530s). I studied the Renaissance during my English lit courses at university and always wanted to visit this amazing city. It does not disappoint. We spent a week exploring its ancient cobbled streets and museums although I have to say, it is one confusing place if you're trying to follow a map. Streets have a name one block and a new name the next, and a new name the block after that . . . and maps are not drawn based on north/south.

The first thing we did upon our arrival by train was book a Chianti wine tour in Tuscany, which took up the entire next day. The bus first took us to the winery where we toured the cellar before we were plied with Tuscan appetizers and many bottles of wine. From there, we drove to two more towns and then a final one where we had a typical Tuscan meal in village restaurant, which included more bottles of Chianti. It really was a fine day (or what I can remember of it). 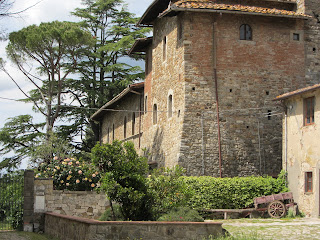 Above is the winery - the wine-tasting was on the second floor. The cellars are just to the left, out of sight of this photo. Below, Ted and I are touring the little town of Greve. (While it may look like I'm leaning on him, I assure you it was the other way around.) 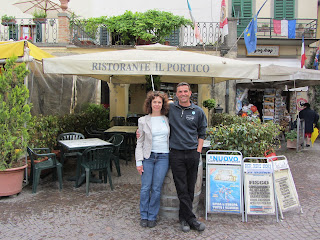 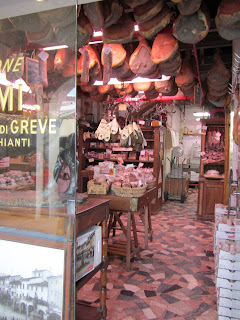 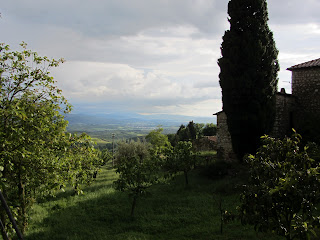 A view of the Tuscan countryside just before sunset.

Back in Florence for the rest of the week, there are hundreds of places to explore. The main 'tourist' sights are near the Arno River, including the Duomo, which means 'cathedral' and refers to the main church in town. All the towns have a church. Most have more than one. 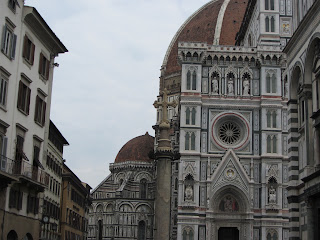 We spent a day visiting the Galleria dell' Accademia, where the original David by Michelanglo is housed (it's awe-inspiring) and then the Uffizi museum. The Palazzo Vecchio, dating back to the 13th century, and its neighbouring Piazza della Signoria are squares near the Uffizi with some amazing statuary, including a copy of David. Picture-taking in most museums is forbidden, but photos of the second David are allowed. 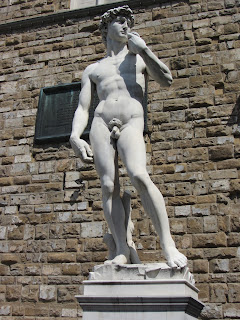 Below is the Rape of the Sabines in the Piazza della Signoria. (The ancient sculpters weren't shy about immortalizing the human body in all its glory.) 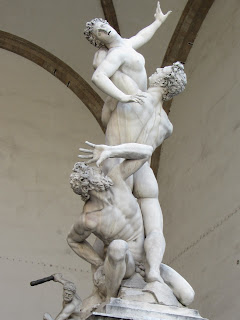 The tower in the background of the photo below was an engineering feat in its day. 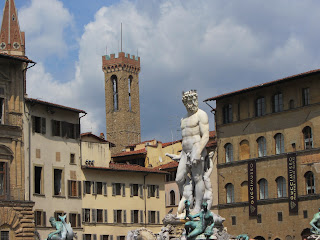 We spent another morning touring Santa Croce, a Franciscan church where many famous people were buried, including Galileo, Rossini, Machiavelli and Michelangelo. There are many of the more common people buried underneath the floor with 'headstones' or markers in the marble. Apparently, the Franciscans wanted people to remember that death was an inevitable part of life by walking over the departed. (or dancing, who can say?) Rossini's tomb is on the left in the photo below. Opulent really. 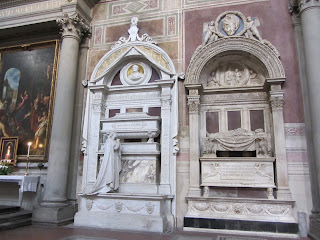 Our last day, we crossed the Arno River to tour the Pitti Palace. It was built by Luca Pitti in an attempt to outclass the Medici family, who controlled Florence for around 200 years. In a twist of fate, the Pittis eventually went bankrupt and the Medici moved in. It became the most opulent palace in Europe until Versailles. In the early 1500s, the architect Tribolo built the Boboli gardens for the Medici to romp in - we strolled around them for the better part of the afternoon. (How to you say 'goes on forever' in Italian?) 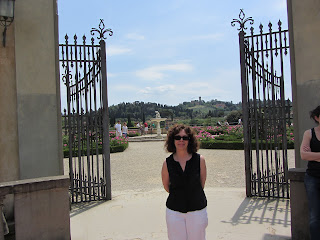 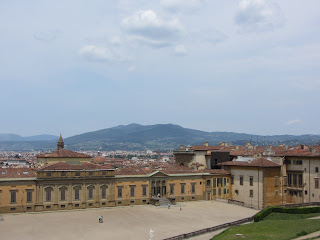 This is just a small portion of the back end of the palace with Florence in the background.

And to wrap up my Florence tour, some photos of the bridges crossing the Arno.  The covered Ponte Vecchio was built in 1345 and the only bridge spared destruction by the retreating Nazis in 1944. The Medici had it covered over so that the common folk wouldn't see them on their way into town from their palace. (Let them eat cake.) 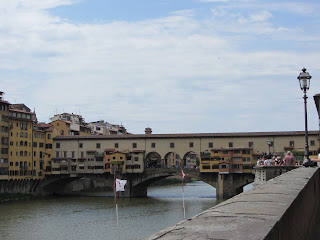 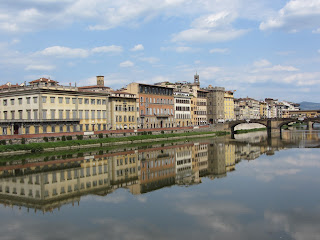 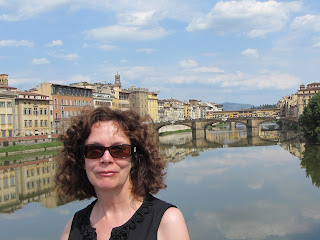