So Many Projects, So LittleTime 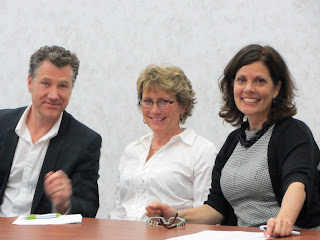 I attended the May Capital Crime Writers meeting on Wednesday night when C.B. Forrest aka Chris talked about working fulltime and finding time to write. Chris has a busy communications job - in fact, he drove directly from the airport to the meeting and had to fly out the following morning for Halifax. He's seated above before his talk with two CCW members Janet Claridge and Katherine Hobbs, who is also city councillor for Kitchissippi ward (speaking of busy). 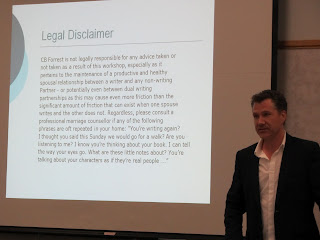 And he spoke for a good hour about everything from plotting a book to carving out time to write to completing a manuscript between flights while completing a kitchen renovation (and doing the destruction and construction himself). The major message is that writers need to write and nothing can deter. The trick is to create time and space and to make efficient use of every minute. Chris's first two Charlie McKelvey books, The Weight of Stones and Slow Recoil, were each shortlisted for Arthur Ellis awards and his third and last in the series The Devil's Dust (Dundurn) will be launched in June. Check out his website for details bout the launch and his books.

I also caught up with another YA author Jeff Ross at the meeting. Jeff teaches at Algonquin and has a third YA novel Dawn Patrol being launched May 27th at Collected Works. Authors love when new readers from the community come out to introduce themselves, mingle with a glass of wine and even buy a book - after all, it takes a year at least to write one and it all goes for nought if readers don't pick it up. Jeff and I launched our Rapid Reads books alongside Barb Fradkin last year, and he tells me that his wife will be making her famous cupcakes again.

I'm currently at that stage in my new manuscript where I'm doing a lot of thinking about the plot and characters. Chris, along with a lot of other authors I know, advises not to edit on first draft but just to get it out completely before going back to rewrite and tinker. I'm not able to work this way - I edit quite a bit as I go, particularly the first 10,000 words. Tim Wynn-Jones said that the opening chapter is the engine that drives the book and it's key to get it right. I'm with him on that.

Speaking of renovations, I'm happy to report that Ted completed painting the bedroom! Now before you get all excited, he decided to sand and varnish the floor, so chaos still ensues. Maybe I need to have Chris come over between flights 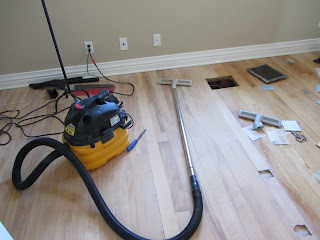