I have great news to share this week. The editorial board at Dundurn has decided to publish the first in an adult murder mystery series that I submitted a few months ago! (This is the manuscript I've been working on all year.) Word came to me late Thursday and I have the go ahead to start working on the second in the series. This current submission has a spot in the fall 2013 roster. So, quite satisfying news.

This week, I also received a couple of advance reading copies (ARCS) of Second Chances, which I read through and have to say, like even after labouring over the text for so many months. I didn't even find any errors - kudos to my editor Allister Thompson - ususally there's one or two that slip past our magnifying glasses. I'm going to drop the copies off today at Collected Works and Kaleidoscope bookstores. Dundurn sent copies to reviewers already . . . and this brings me to the fun stuff . . .

I've booked the launch for Saturday, September 22nd from 2-4 p.m. at Collected Works (Wellington and Holland) in my neighbourhood. It's early days yet, but I hope each of you can mark it on your calendar and will come out to raise a glass and help me celebrate. Councillor Katherine Hobbs will MC the event, and I might even read a snippit.  The cover has a quote from Tim Wynn-Jones, award-winning author and fabulous writer:

"The plot of Second Chances crackles like summer lightning . . . Chapman skillfully weaves together a story, sensual and taut, that is a slow burn from the very first image."

I dropped in on Robin Harlick last Saturday and purchased A Green Place for Dying - I sure do like that title. Here we are in Chapters Pinecrest: 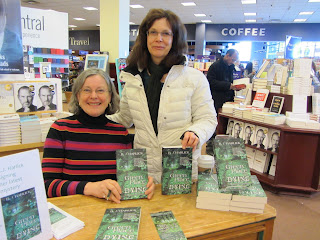 I also attended the Capital Crime Writers' meeting on Wednesday where Linda Wiken talked about her road to being published with Berkley in the U.S. She has a three book deal and the first, A Killer Read (another great title) will be released next month. She's launching with Vicki Delany at the Library and Archives April 19th - all welcome.

So much going on.

But I know what you really want to know if whether we have paint. Not yet, but the room is being readied . . . 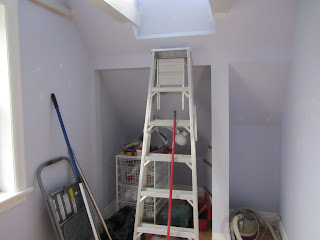 All good things come to those who wait.

Great week to everyone as summer weather slips into the Ottawa Valley. Might be time to find an outdoor patio and do some people watching in the bright sunshine. It feels like it's been a long time coming.
Posted by 7 Criminal Minds at Saturday, March 17, 2012