A Location for Murder 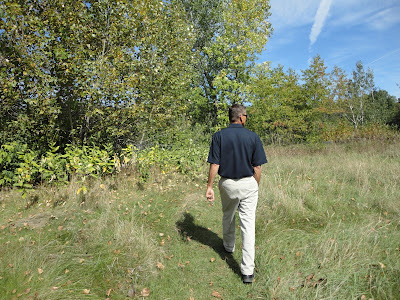 Sometimes on a Saturday or Sunday, Ted and I like to spend the day in one of the small communities within driving distance of Ottawa. We go for lunch and wander around the town, having a look in the shops and bookstores. One day earlier in September, we decided to have lunch in Manotick, about half an hour from our house, heading south along the Rideau River. "This might work for a setting in the manuscript I am working on," I said. "In my mind, I had this idea for a murder along a walking trail by the Rideau but the actual location I'm thinking of isn't quite right because there's no river."

After walking the entire Manotick downtown, we settled on an Italian restaurant with a courtyard. The food was superb and it was relaxing to sit in the late-summer sunshine with a glass of wine and nothing in particular to do. On the way home, we stopped at Blacks Rapids to see if this would do as the setting for my murder.

"Nope," I said disappointed. "No walking trail and nowhere secluded." We continued on home and I worked on moving the scene to somewhere on the Ottawa River, which would mean moving my characters further into the city. I started rewriting, but wasn't entirely satisfied with the changes. I set the manuscript aside and pondered what to do.

Ted came home from work one day and said, "I think I've found the perfect location. It's near that place we had to get the car towed where it was sliding off the side of the bank into the river." We looked at each other, somewhat amused at the memory. Ted is a sheet metal worker and drives to jobs around the city. He happened to be measuring metal work at a building nearby the place we'd stopped looking for rocks one Mother's Day . . . but that's another story.

So last Sunday, we drove out Prince of Wales Drive and spent the afternoon scouting out three locations in the woods along the Rideau River until we hit on the almost-perfect spot in the Chapman Mills Conservation Area - even the name seems like a good omen :-) The photo above shows Ted as we head into the woods on our search for a place to commit murder. Kind of macabre if you think about it too deeply, which you probably shouldn't.

On the way home, Ted said, "Well, they said no leaving garbage, no dogs off leashes, but nothing about dumping a corpse. I think you're safe as far as the bylaws go."

"I'm going to be setting my next book in another town." I said. "I see some overnight roadtrips in our future."