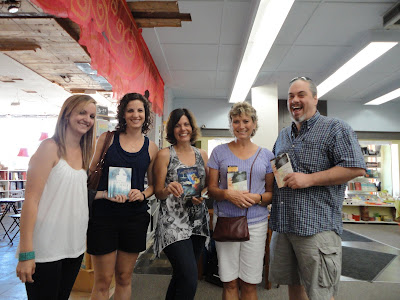 A few of my peeps who came by for the Collected Works book signing last Saturday. Left to right, Julia, Lisa (my daughters), Katherine, Janet and Bernie. The signing felt a little like a launch - relaxed and people mingling and having a good time. I like when this happens! I sold quite a few books, to old friends and new. It was also my first event with Patrick coming out to video tape for a video project we're working on for Youtube and my website. I thought it would be weird, but Patrick moved around the store so discreetly, it was easy to forget he was filming. He might put together a little video just on the signing so I'll let you know if he manages time to do it.

It was back to work on Wednesday so my writing is back to it's old catch as catch can schedule. (Is that even an expression?) Fatigue also becomes an issue. After a day of work, it can be hard to form coherent thoughts although Ted may argue this happens even while I'm on holiday. What luxury it would be to have a year just to write. It might be nice to go back to Shakespeare's time when people had patrons. Of course, there's that nasty plague business and all the forsoothing.

I attended a Capital Crime Writers planning meeting for an event at the Ottawa Public Library October 22nd called "Capital Crime Writers - A Day to Kill". Mark your calendars - there will be local mystery authors, celebrities, food and fun. One of the perks of these meetings is that our past president's wife Margaret loves to cook and she feeds us in their back garden. This time, the BBQ was capped with homemade peach pie and peach cheese cake. Did I mention Margaret will be providing lunch at the October 22nd event? Last time, she made roast beef sandwiches with carmalized onions amongst other delicacies. She's become our hero.

Well, it's still a hot old summer here in Ottawa. As if in commiseration, my oven has conked out so I can't cook. Sometimes, I think the universe really is on my side.