The count down is on - fifteen days until the Ottawa launch of Turning Secrets! The annual party is but days away :-) 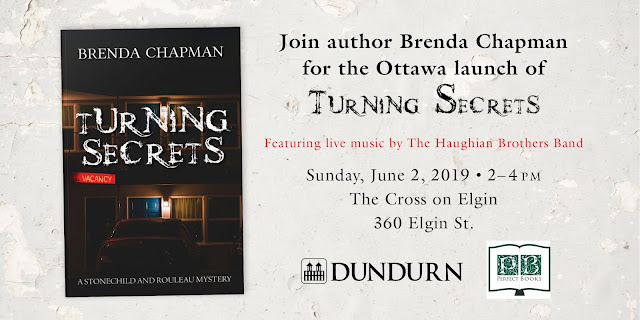 A good writing week this week as I slip back into the groove. I have to say that writing a thriller is ... wait for it ... thrilling. It's more like the Hitchcock pacing that I love. Lots of tension with the suspense building from a warm pot to a whistling tea kettle. I spent the first part of the week making chapter notes and tuning up the first chapters and am now into the second quarter. (Kind of like a basketball game - go Raptors) (That cheer's for you Robin) Anyhow, my protagonist is in all kinds of trouble and only just beginning to realize it ... how much fun am I having?!

My editor Shannon was in touch end of day yesterday with a tentative schedule for the last Stonechild book called Closing Time. We'll be working through June so another period that I'll have to set aside my latest project to focus on editing the last one. I also will be teaching a writing workshop in August and have to turn my mind to that. Finally, I'll be writing a blogpost for 7 Criminal Minds for this Monday with my book recommendations for Fathers Day. Should be a good few weeks to check in to find out what other authors recommend as well.

I'll be on 1310 News's The Power Lunch this week on Wednesday at noon if anyone is near their computer. The half hour show is also on Rogers Cable 22 and 1310 News Facebook live so I can't show up in my sweats. I try to stay up on the news especially as the date of my guest spot approaches in order to have an informed opinion. There is lots of craziness going on in the world these days I have to say.

Some of you have been asking me about the books being optioned for television and what's going on with that. I'm sad to report that the L.A. screenwriter who optioned the books for the past two years and change suffered a terrible heart attack almost two months ago and was in an induced coma for a few weeks. Happily, he's recovering and home as of a few days ago but the project is on ice. He had a producer interested before he became ill, but I'm not sure if anything will come of this moving forward.

Well, the sun is out and the garden centres are open so time to get a bit of planting done. I'm gambling on the end of the frost (after checking the long range forecast) but who really knows? I still have the snow tires on so hedging my bets .... 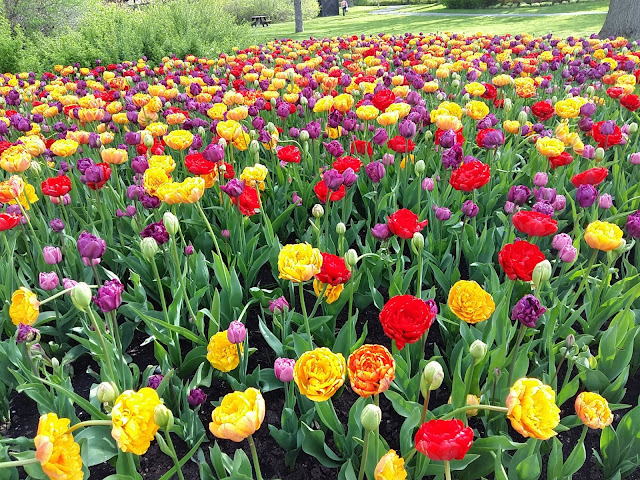 Last year's tulips at Dow's Lake - they're less eager to open this year and I can't blame them.