Some good news this week. Pat Campbell, Grass Roots Press publisher, was in touch and asked me to write two more Anna Sweet novellas. She will publish both at the same time in fall 2019 with a campaign to promote the entire series. The eighth book will be the final in the series so I'll have to gear the last two stories to this end point. She mentioned that so many people have told her how much the love these books - music to my ears.

In the meantime, I'm working away on the sixth Stonechild book entitled Turning Secrets and am currently into the climax of the book and a few thousand words away from finishing the first draft. My process seems to be: write a few paragraphs, pause, think, write a few more hundred words, pause, think, go back and rewrite, pause and think. I'm not certain why I'm so hesitant with this ending, but give me one more week and I'll definitely be done. This leaves me a few months to edit and pull all the strands together more tightly. I also would like to make a trip to Kingston to check out a location, oddly enough that does not include a bar :-)

If you had a chance to watch the tv mini-series Alias Grace based on Margaret Atwood's book, what a treat. The acting was superb and the sets were extremely well done. I read the book some time ago and would like to reread it after seeing the series. My recommendation for the week!

A nice bit of publicity in my mailbox on Wednesday. My good friend and neighbour Kathryn Anthonisen sent in a recommendation for my series to a local magazine called "Neighbours of Westboro" and they published her words in their entirety along with a photo of the series. The magazine is free and goes to several west-end Ottawa neighbourhoods so I'm hoping to attract a few new readers. Thank you Kathryn! 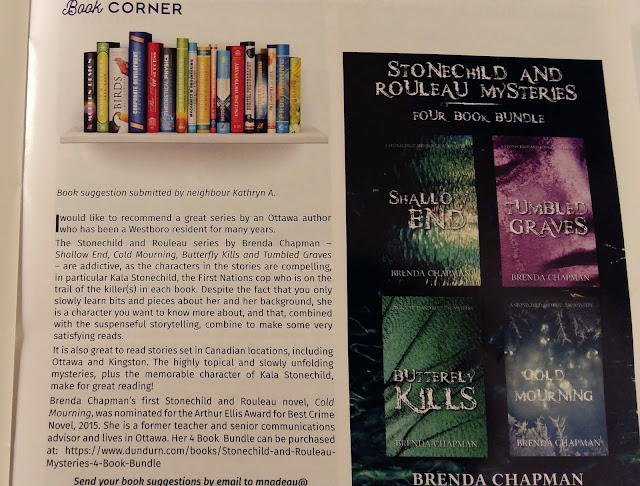 Don't forget to set your clocks back tonight my Canadian friends (with the exception of Saskatchewan). An extra hour of sleep is never a bad thing.