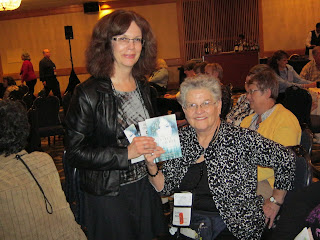 This photo arrived from Wynn Quonn which he took during Meet the Canucks night in Cleveland - I'm handing a copy of In Winter's Grip to a winner in the audience. Nice to recieve this little memento of the evening a few weeks after the fact.

Well, Ted and I spent last Saturday and part of Sunday in Kingston scoping out scene locations for the manuscript that I'm currently working on. We walked around the downtown and the area just west and south of Queen's, finding the perfect spot for my murder. Ted knows just about everything about construction and he was able to help with details. For example, I have an unfortunate event happen in a basement not far from campus. Ted pointed out that the homes didn't have basements until after the 1930's when octupus furnaces were installed. A lot of the homes in the neighbourhood where this . . .  uh unfortunate event will take place, do not have basements, but we found some that do. It was a eureka moment. 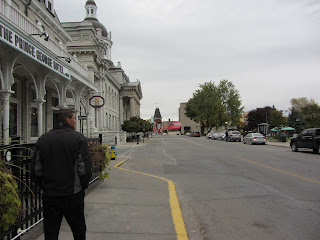 I also needed a pub for some of my scenes and we stumbled upon one that will suit perfectly. We even tasted the beer, all in the name of research. I'm thinking one of my characters might enjoy a day at the spa too. It's all about the realism. 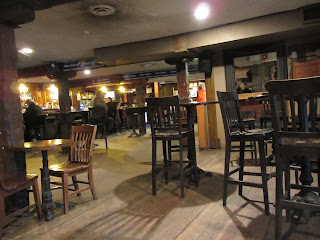 I have to say that when I tell people that Ted and I are making field trips to distant places to find places to murder my characters, I get sideways looks and comments about life insurance. There are limits to my research, I can assure you.

Another eureka moment - the Grass Roots Press publisher, editor and I brainstormed for a name for my adult literacy book, which I had tentatively called "The End Game". After some to-ing and fro-ing we came up with My Sister's Keeper.  Quite excited about this project.

Next Saturday, I'll be at Brittons in the Glebe signing copies of Second Chances and In Winter's Grip between one and three p.m. I hope you can stop by for a visit.

To warm you up for a read of Second Chances, read this great review posted today on Mystery Maven Canada.

Good end to October everyone.
Posted by 7 Criminal Minds at Saturday, October 20, 2012