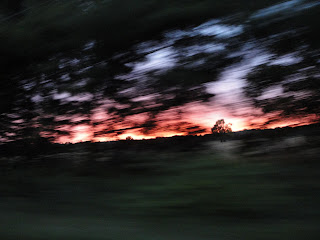 This is my picture of time flying, which seems fitting on New Year's Eve 2011. It was taken one hot summer evening this past summer in Cherry Valley, Prince Edward County. We had a great week with friends Kathy and Bill Adair and Janice and Peter Murdoch, all the more special because Janice and Peter moved to Cold Lake, Alberta the week afterwards.

We did more travelling this past year. It began early in the year as we followed Lisa and her team of Rachel, Emma and Alison on their Scotties run - January in Thornhill, Ontario where they won the provincials and Charlottetown in February where they finished fourth in the country. An exciting two weeks, no doubt about it.

In June, I flew to the opposite end of the country with friends Katherine Hobbs and Darlene Cole to Vancouver and Victoria for Bloody Words, Canada's national mystery author conference. It was my first time that far west and another wonderful trip with perfect weather.  I loved the west coast although I am told it rains there on occasion.

What else happened this year? The Second Wife was released in the summer and I launched it at the Clocktower Pub with fellow Ottawa authors Barbara Fradkin and Jeff Ross, mixing cupcakes, beer and a very good time. Icing on the cupcake was The Second Wife's nomination for an Ontario Library Golden Oak award, the winners to be announced at a luncheon in Toronto in June.

I continued writing and completed a manuscript for an adult mystery that I hope to turn into a series. I am awaiting feedback from the publisher before continuing with this project. I also had a fun booksigning at Collected Works and took part in a Capital Crime Writer day in October at the Ottawa Public Library, the highlight of which for me, was CBC Radio's Alan Neal reading passages from In Winter's Grip. He even managed to send a shiver down my spine. I spoke at the People, Words and Change literacy breakfast and was guest author at a Canadian Authors Association meeting in the fall. I also judged the Awesome Authors English short stories for the second year and presented awards at Ben Franklin place in the spring - I'll be soon reading this year's entries, which should arrive in February.

I make no resolutions for 2012 except my usual one to look for some interesting experiences, meet new people, keep up with old friends and have some fun. Already, plans are afoot. This year, we'll be heading to Italy for a two-week vacation and I've also got Bouchercon lined up in Cleveland in October, travelling again with Darlene and Katherine. And of course, Second Chances will be released in September.

So the year that was was a good one. I am thankful for my time with friends and family with so many good times and so much laughter. As the clock ticks down to the New Year, I raise my glass to each of you and wish you much joy and fulfillment in the year that is to come.
Posted by 7 Criminal Minds at Saturday, December 31, 2011